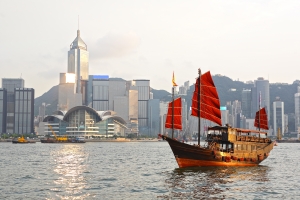 In the late 20th century, Hong Kong became the undisputed financial center of the Far East. Tokyo might have had a larger stock exchange, but the city never saw itself as a global financial hub. It was Hong Kong that attracted large global banks, PE firms and hedge funds to establish regional headquarters.

After Hong Kong reverted to Chinese rule in 1997, its finance sector grew even larger on the back of an influx of mainland Chinese capital. Inevitably, Hong Kong's reliance on the mainland grew. Today, Hong Kong is arguably most important as a hub for Chinese companies' fundraising activities and the trading of offshore renminbi.

In terms of traditional capital markets, Hong Kong dwarfs its regional rival Singapore. But Singapore has an edge in fintech because of its streamlined regulatory regime, global orientation and relative tech prowess. As the two cities compete to attract fintechs, Singapore may ultimately capture more global business.

Singapore's Fintech Festival is the largest event of its kind in the world. In 2018, 45,000 officials and businesspeople attended. The 400 investors present vowed to invest US$12 billion in Asean through 2021.

In contrast, funding in Hong Kong fintech startups fell US$188 million from a record US$546 million raised in 2017. Analysts say that investors played it safe while awaiting some regulatory changes. The investors are primarily mainland Chinese, even if their companies are based in Hong Kong. Among Hong Kong's top fintech investors: Alibaba's Ant Financial, Tencent, China Growth Capital, Source Code Capital, CDH Investments, Legend Capital and Horizon Ventures.

Hong Kong has long enjoyed a reputation for reinventing itself. It transformed from a manufacturing hub in the 1950s to a financial center by the 1990s. Some observers, however, worry that Hong Kong has run out of ideas. "Apart from an IPO platform for big Chinese companies, it has nothing to offer any more," entrepreneur James Chen told Professional Wealth Management in a December 2018 interview.

Given Hong Kong's proximity to mainland China, further integration with the mainland economy looks inevitable. Hong Kong elites say that the city can further its fintech development through the government's Greater Bay area mega-project, which aims to create the mother of all special economic zones by integrating the Hong Kong and Macau SARs with nine cities in Guangdong Province.

In a February interview with The South China Morning Post, former Hong Kong Financial Secretary Chen Ka-keung urged Hong Kong fintech startups to first target the Greater Bay Area to build scale. “Without scale, it is very hard for them to enter other markets. This is why the Greater Bay Area is so important," he said.

Chan has a point. And if the project succeeds, Hong Kong could become the fintech hub of a region home to 70 million people. That would be an impressive feat in itself, and more feasible for Hong Kong than focusing on Asean, where Singapore has a homefield advantage.

More in this category: « China leads global fintech funding in 2018 Markets shouldn't jump the gun on a Sino-US trade deal »
back to top