Future of the rising government debt in China

Last month, Shanghai Chaori Solar Energy Science & Technology became the first company to default in China's bond market when it failed to make a full payment on the issued debt. This shows that the Chinese state is not going to back up even big private borrowers. Several other companies are also on the verge of debt insolvency, according to local media sources, with government debt also on the rise.

Private debt is only a tip of the iceberg. Government debt in China is very high and the number of loans is considerable and rising. Especially fast growth in debt was withing local governments, which are not allowed to issue bonds themselves, but do that via companies that they own. 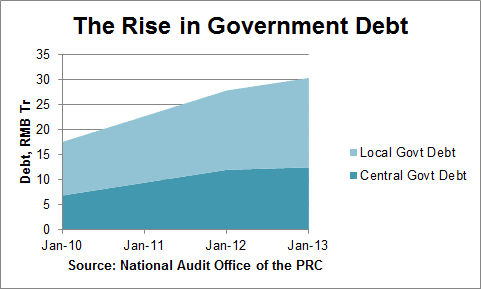 However, we believe a massive debt unwinding will come in the next few years. While the politicians may allow a company here and there to default in order to show that risky borrowing is not encouraged, the stability-focused government will be quick to support any company whose collapse might have a systemic risk. In our view any necessary measures will be taken to prevent a full-blown crisis. We are more likely so see a Japanese-style restructuring with a decade or more of a slow dissolving of the debt excesses.

More in this category: « RMB/USD spot fluctuation range increase to ±2% Latest size of shadow banking estimated at around RMB15-20tn »
back to top