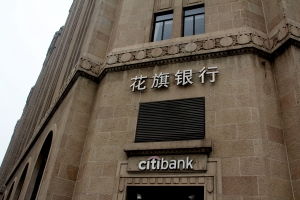 Foreign banks have a negligible presence in China, the world's largest consumer market. Research by KPMG has found that foreign banks hold about 1.3 % of China's domestic banking assets as of late 2017, compared to roughly 2.4% a decade earlier. Brokerages have not fared better. In 2015, UBS Securities and JPMorgan First Capital ranked 95th and 120th, respectively, among China's 125 brokerages by net income, according to the Securities Association of China.

It wasn't supposed to be this way. Beijing pledged to fully open its financial sector to global competition when it joined the World Trade Organization (WTO) in 2001. Notably, Beijing promised to remove restrictions on foreign ownership in the banking sector by 2006.

Yet as the Chinese economy boomed in the 2000s, financial reform stalled. Rather than open up the financial market to foreign competition, Beijing focused on strengthening the Big Four state-owned banks - Bank of China, China Construction Bank, Agricultural Bank of China and Industrial and Commercial Bank of China - which it views as strategic financiers. Between 2006-2010, the Big Four all went public and today are among the world's top ten banks by market capitalization.

Meanwhile, foreign banks have languished. KPMG estimates that foreign banks' return on equity has averaged 7% in recent years, half that of the Big Four. With a few exceptions, foreign banks have no meaningful retail or corporate business in China. Onerous licensing requirements have hemmed them in. For instance, in order to take deposits, foreign banks need licenses for bond trading, settlement and underwriting. All of those licenses take time to procure if they can be obtained at all.

China's banking regulator "has for years played chicken with foreign banks looking to boost their solo commercial banking and retail capabilities," notes AsiaMoney in a June 2018 report. The report cites a source as saying that CBRC pressured foreign banks eager to open branches on China's prosperous coast to promise to invest in less desirable inland locations, where the business environment is more unpredictable.

Although Beijing renewed its pledge to scrap financial market barriers in 2017, progress has been predictably slow. It was only after the start of the Sino-U.S. trade war that hopes rose again among foreign financial institutions. Nothing else had worked: Why not the Trump administration's billions of dollars in tariffs on Chinese goods?

As trade tensions with Washington flared, Beijing sprang into action. At the annual Bo'ao Forum in April 2018, Yi Gang, governor of the People’s Bank of China, pledged that China would scrap limits on foreign firms' ownership of local banks and asset management companies in a few months' time, while allowing foreign banks to establish local branches in China. Beijing would treat foreign and domestic investors the same, he said.

To be sure, some European banks saw an opportunity to tap opportunities that Beijing would close off to their American competitors in retaliation for Trump's tariffs.

“Given the tensions between the U.S. and China, I have a question of whether the US banks will ever be that strong in China,” Frédéric Oudéa, chief executive of Société Générale, told The Financial Times in August 2018.

Thus far, European banks have a slight edge in terms of approvals for new business ventures in China, but it's too early to say whether they will retain a long-term edge over their U.S. counterparts. In December, Switzerland's UBS became the first foreign bank approved for a majority stake in a China-based securities joint venture under new rules announced in 2017. UBS's stake in its China joint venture will increase from 24.99% to 51%.

Meanwhile, nearly a year into a trade war that has bruised the Chinese economy, Beijing is signaling willingness to allow U.S. firms greater access to its financial sector.

“If the U.S. side complains that we have opened up too slowly, we can speed it up ... We are fully convinced...it’s good for China and good for the United States,” Fang Xinghai, vice chairman of the China Securities Regulatory Commission, said at the annual China Development Forum in March.

Speaking to The South China Morning Post in March, Guo Shuqing, chairman of the China Banking and Insurance Regulatory Commission, said: "I can say with certainty that, on the opening up of the finance sector, China and the US can achieve a complete agreement."

Even if Beijing makes good on its promises to fully open its finance sector to foreign competition, foreign financial firms aren't likely to go far without reliable local partners who know the Chinese market. For instance, in 2017 HSBC launched the first foreign majority-owned securities joint venture in China with state-owned Qianhai Financial Holdings as its partner.

HSBC was able to form that JV in China thanks to its Hong Kong roots. A provision in the Mainland and Hong Kong Closer Economic Partnership Arrangement (CEPA), permits qualifying Hong Kong-funded financial institutions to each set up one fully licensed joint venture securities company in Shanghai, Guangdong Province and the special economic zone of Shenzhen.

David Liao, CEO of HSBC China, told state-run Xinhua last October that HSBC "participates in and supports China's financial market opening-up." He added that HSBC would support renminbi internationalization as well as the implementation of the Belt and Road and Greater Bay Area initiatives. Liao's comments are almost indistinguishable from that of an executive at one of China's state-owned banks.

For U.S. banks, trumpeting financial support for controversial Chinese projects wouldn't go over well at home. Somehow we don't see Citibank or Bank of America pledging billions of dollars in funding for One Belt, One Road.

At the United Nations in March, U.S. Acting Ambassador Jerome Cohen said that the Belt and Road Initiative had "known problems with corruption, debt distress, environmental damage, and lack of transparency."

China's securities segment is probably a safer bet for international financial firms. In March, Beijing approved Japan's Nomura Holdings to set up a foreign majority-owned securities JV in Shanghai. Nomura will hold 51% of the new venture, while Shanghai-based state-owned enterprise Orient International (Holding) Co. Ltd. will have a 49% stake.

“With an increased presence in China, we aim to support economic growth in both China and Japan and firmly establish ourselves as a global financial services group with deep roots in Asia,” Nomura Chief Executive Koji Nagai said in a statement.

At the same time, CSRC announced it would approve JPMorgan Chase to set up a majority-controlled JV. While JPMorgan will hold 51% of the JV, investors in the minority stake will include Shanghai Waigaoqiao Free Trade Zone Group and four other investment firms, according to The South China Morning Post.

One caveat for foreign firms in the Chinese securities segment is that they may have difficulty finding attractive acquisition targets. Given that Chinese securities firms are typically highly profitable, only laggards are likely to sell off majority stakes to foreign investors, noted economist Andrew Collier in a December 2017 Foreign Policy commentary. Further, foreign firms may be squeamish about bringing their top trading technology to "a country with weak protection of intellectual property," he says.

Collier believes that foreign firms will continue to have difficulty breaking into China's commercial lending market given the dominant role of SOEs there. "Weak, financially strapped local banks may be willing to sell but they offer myriad financial and compliance risks," he says.

Looking ahead, foreign financial firms with strong technology capabilities may be able to cooperate with low-tech Chinese banks that want to better compete against China's internet financiers like Ant Financial and Tenpay. In March, the Netherlands' ING and Bank of Beijing announced an RMB 3 billion JV in which the former will take a majority stake.

As Finextra noted in a March report, the two banks have been working together for many years. ING first took a minority stake in Bank of Beijing in 2005 and is currently its top minority shareholder with a 13% stake.

The tie-up could be well turn out to be a bellwether for financial reform in China. If the CSRC greenlights the deal, it will mark the first time a foreign shareholder takes a controlling interest in a domestic lender.

More in this category: « Markets shouldn't jump the gun on a Sino-US trade deal Can China's P2P lenders seek solace in India? »
back to top