With growing national security concerns surrounding imported western network equipment, China’s intensions have been to utilise homegrown network equipment to support its IT infrastructure. Tech giants like Cisco have been displaced to the sidelines with shrinking market share and deflating revenues in the Chinese market. It seems Cisco, who was once critical to the design and construction of China’s internet revolution in the 90’s will be marginalised if it does not take action to boost its sales in China.

In September of last year, the China Banking Regulatory Commission (CBRC) drafted regulations to instruct Chinese bank suppliers to use technologies which were secure and controllable (i.e. non-western supplied networking equipment). This was partly due to the impact Mr. Snowden’s NSA disclosures had on the global stage in 2013. 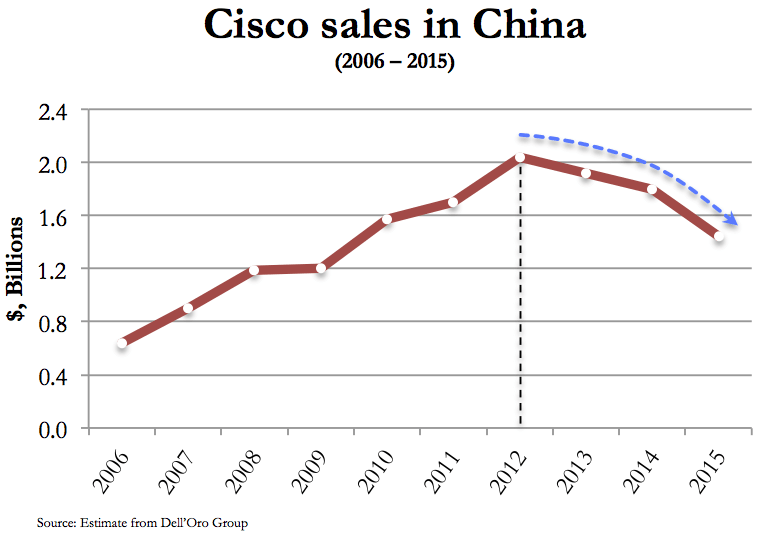 The CBRC’s intentions have been to decrease its dependency on western suppliers and subsequently increase the number of Chinese suppliers.  However, the regulations were dropped following pressure from the United States and Europe. This decreasing dependency on western technology is a trend which can be seen across a number

of initiatives set by the Chinese government, including; China’s intentions to develop its homegrown satellite navigation system, Beidou Navigation System.

Cisco’s main rival in China, Huawei, has seen considerable growth and with its increasingly competitive product offerings, Cisco is likely to face a number of battles to remain a key challenger in China.

Through this partnership, the JV will provide networking technologies, information security technologies and other services to the market which include: IT infrastructure, cloud, data centres, smart cities and big data platforms.  The Chinese entity is expected to have a 51% stake in the JV.

Cisco’s CEO Chuck Robbins intends to invest a further $9.9 billion dollars in China to support local innovation which should prove positive for the tech giant, providing it can remain competitive in a highly regulated and security conscious nation.

This kind of market investment has worked in the past for Microsoft and Intel who both invested significant amounts of money in the market to curry favor with the government. Time will tell whether Robbins’ investments will prove successful and will put Cisco back in China's good books.

More in this category: « Alibaba solidifies its sports strategy with creation of Alibaba Sports Group Wincor Nixdorf acquisition will bolster Diebold’s position on ATM market in China »
back to top
© 2007 - 2021 Kapronasia