ATMs purchased by the Big 5 Chinese banks comprise a smaller share of new installs now: “only” 46.85%. This is the first time these banks procured less than half of all new ATMs, down from 64% in 2012. We estimate that the Big 5 banks' share will continue to shrink as they have nearly saturated all their geographical focus areas, so most purchases are replacements rather than new installs.

Rural credit cooperatives, rural commercial banks and the Postal Savings Bank of China have become the main purchasers of new ATMs. Rural financial institutions acquired approximately 22,680 new ATMs or 23.35% of the total. The Postal Savings Bank of China alone doubled its 2013 share to 10.09% in 2014. As China’s government continues its push to provide financial services to the customers in rural areas, rural credit cooperatives and rural commercial banks will continue to invest in new equipment.

Another important trend is the ongoing success of domestic manufacturers, who accounted for more than 50% of all ATMs sold for the first time. GRG Banking, which has been the number one seller for seven consecutive years, managed to increase its market share to 26.61% with 25,850 ATMs sold in 2014. Hitachi, Yihua, Diebold and OKI are also on the Top 5 list with 16.85%, 11.54%, 6.71% and 6.63%, respectively. These companies together with GRG Banking captured 68.34% of the market.

Among the foreign ATM suppliers, Japanese brands are doing well and occupy 3 spots on the Top 5 list (Yihua is a Japanese Chinese JV). The US and European providers’ market share dropped to 14.14% from 32.70% in 2010. We expect foreign manufacturers’ position to drop further as local manufactures catch up with technology and regulators encourage banks to ensure the “safety” of the equipment they use.

The trends in China are not unique, ATM manufacturers globally are struggling as local producers are providing better products and new developments in fintech and online finance entice consumers to move their finance to the digital world. Wincor Nixdorf is cutting jobs internationally and other manufacturers have to change their mindset to make their product relevant for the rapidly changing market. 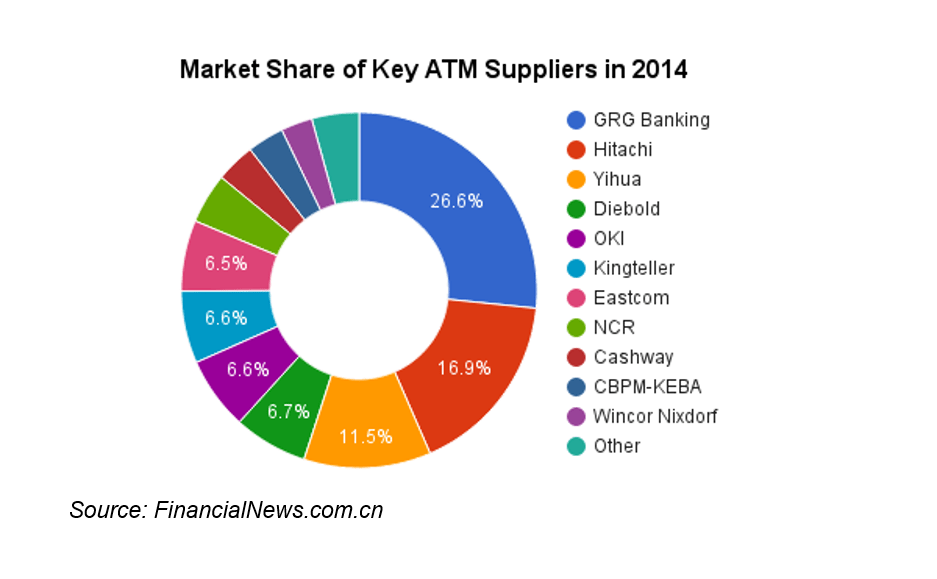 More in this category: « Illegal fundraising in China through P2P lending continues to rise Partnership between CreditEase and Wellington takes Chinese money global »
back to top