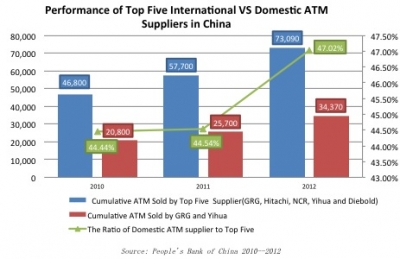 According to the latest figures from the People's Bank of China, the aggregate number of ATMs sold by top five international suppliers, including GRG, Hitachi, NCR, Yihua and Diebold, increased dramatically from 46,800 ATMs sold in 2010 to 73,090 sold in 2012, a roughly 56% growth.

What is interesting though is that the sales performance of Chinese ATM manufacturers including GRG and Yihua, has also been robust as well and in fact taking a larger percentage of overall ATM sales in mainland China. With a 20%+ increase year by year, Chinese ATM manufacturers have increased sales from 20,800 ATMs in 2010 significantly to 34,370 ATMs in 2012, a nearly 65% increase in 2 years. This is also reflected in the % of domestic ATMs sold as compared to the whole, which went from 44.44% in 2010 to 47.02% in 2012.

As the Chinese government starts encouraging the purchase of domestic ATMs, GRG and Yihua will likely continue to gain market share in the next few years to the detriment of the international players. 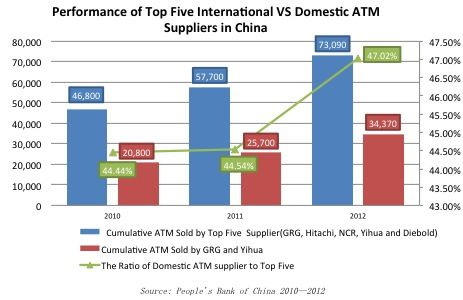 More in this category: « A New Round of Government Control on China's Internet Finance Industry Should you worry about the security issues in China? »
back to top