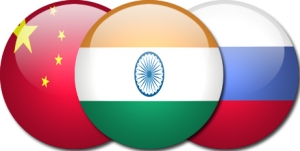 Reportedly, the Russian financial messaging system SPFS will be connected with the Chinese and Indian interbank payment systems. Iran has also expressed interest in joining the network. Some Iranian banks were cut out of the SWIFT network in 2012 and again last year as part of U.S.-led sanctions.

Two years ago, amidst rising concern about North Korea's nuclear program and missiles, SWIFT removed the remaining North Korean banks still connected to its system. “The DPRK (Democratic People’s Republic of Korea) banks remaining on the network are no longer compliant with SWIFT’s membership criteria,” SWIFT said in a statement.

A recent commentary in the Chinese-language Hong Kong Economic Times described SWIFT sanctions as a "financial nuclear bomb in the hands of the United States." Should Washington use SWIFT to sanction China or Hong Kong banks, the mainland and Hong Kong financial systems would be crippled, the commentary opined. It urged China to use blockchain technology to establish a new clearing system and end SWIFT's dominance over international payments.

Some observers in China have also criticized CHIPS, which works together with SWIFT and is integral for converting payments into the US dollar, processing transactions, and making electronic payment transfers and clearances.

Former Chongqing mayor Huang Qifan said CHIPS is a "financial tool of US long-arm jurisdiction and global hegemony," according to a recent report in China's state-run Global Times.

Some scholars in China question the viability of Russia, China and India jointly developing an alternative to SWIFT. Given potential conflicts of interest among those countries, "The drive will be extremely difficult, if not to say utterly impossible," Zhu Jiejin, an international relations professor at Fudan University, told The Global Times.

More in this category: « China to remove foreign ownership caps on fund companies from April 2020 Is WeBank the world's top digital bank? »
back to top