Will Consumer Finance be the next fintech focus for China?

Over the past year, China's Consumer Finance industry has been attracting a significant amount of attention. It may be the next hot spot for financial development in China.

Roughly defined, consumer finance in China includes loans for all different categories of consumer spending, with the exception of property mortgages. Its target customers are mainly individuals or small and medium enterprises who have less stable income or credit history, and which traditional financial institutions, such as banks, may not have been willing to lend money to because of their relatively higher risk. However, the customer segment is not small: among China's 1.4 billion person population, over 70% are still considered mid-low income consumers. And there are countless more small businesses.

Domestic consumption has been growing quickly in China in the recent years; as the economy has developed, so has people’s disposable income and their willingness to spend. At the end of 2017, the China's total consumption exceeded 33.2 trillion RMB (USD $4.8 trillion), with the percentage of that funded by lending increasing rapidly. Even more rapidly than consumption as a whole - a further indication of China's credit boom. 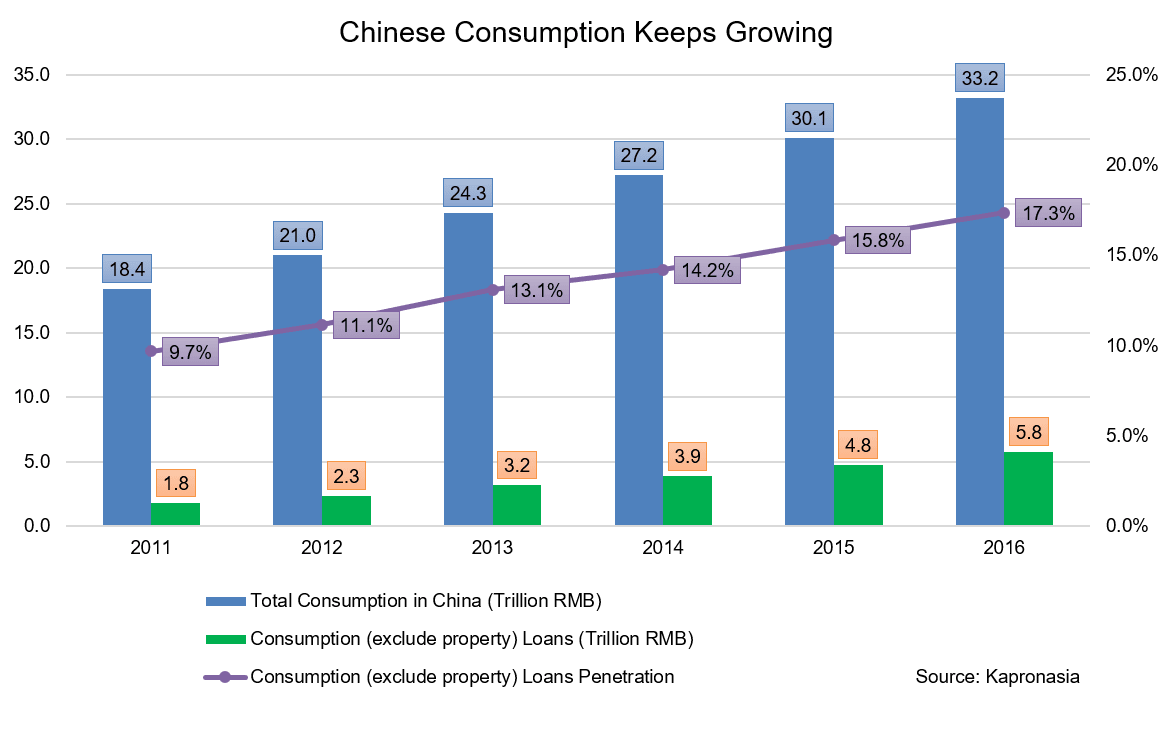 Despite the growth, there is seemingly more room to grow. The Chinese government has encouraged the development of consumer finance to support financial inclusion especially as China's economy has transformed from a production focus to consumption. In the US, consumption accounts for 83% of GDP, while in China, it is at just above 50%. As the market is still new, it is less competitive than other financial industries.

Internet Lending Companies and licensed Consumer Finance companies are the major players in the market which total about 100 at the moment with more companies waiting on for licenses. The difference between these two types of companies are: licensed Consumer Finance companies are considered to be financial institutions similar to banks, so they are under the supervision of China Banking Regulatory Commission (CBRC), and they have the access to the credit records of the central bank (the PBOC) and the interbank capital market.

The biggest difficulty for Consumer Finance in China is the credit records. According to data from PBOC, there are still 916 million people with no credit records. That is 65% of the whole population. In comparison, 89% of Americans have a credit score. The government has encouraged third party companies to develop other credit rating system, however, the development is slow. As a result, many players in Consumer Finance companies are running with little risk control systems. They may look fine while the market is still growing fast. But in the future, when their business expands to certain level, the accumulated risk will be a huge concern.

More in this category: « The Next Big Thing: China's Digital Banking Is Xinlian the answer to the Individual Credit Checking System in China? »
back to top