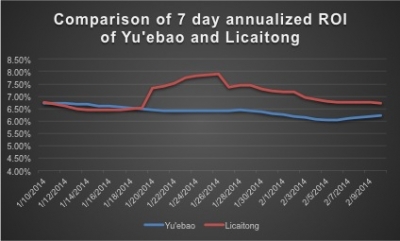 Not satisfied with just taking deposits from banks, online finance platforms are facing more competition from each other.

We have written before about how the new online finance platforms like Yu'ebao and Licaitong have started to shake up the banking industry. Offering a typically higher interest rate than most bank deposit products and near instant liquidity, the Chinese online finance companies are already posing an increased threat towards banks who are struggling with liberalizing interest rates, increased competition from other banks, and asset quality.

Yu'ebao was the first mover in the space and with the advantage of being tied into Alibaba's Alipay platform, AUM grew rapidly. Not to be outdone, both Tencent and Baidu have since launched their own platforms into what is becoming an increasingly competitive space.

Tencent's Licaitong was launched in January 2014 in cooperation with Huaxia Asset Management. Ironically, Huaxia used to be China's largest asset management company, but was overtaken by Tianhong, which is Alibaba's partner for Yu'ebao, after the launch of Yu'ebao.

What we are seeing now is increased competition between online finance portals. On the chart below we can see a comparison of 7-day annualized ROI of Yu’ebao and Licaitong and how the return of Licaitong has been much higher than Yu’ebao since January 19th 2014. 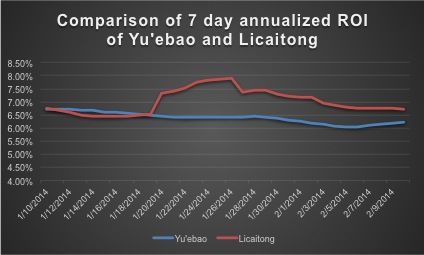 The platforms are all relatively commoditized with the only main differences being in the method with which users load their account and the interest rate given - which is why the differences in return are so critical.

It is still very early days for all of the online finance platforms in China, so somewhat difficult to see how they will perform and/or last over the longer term. The ongoing quest to provide higher returns could prove to be an issue in the long-term if portfolio managers move into riskier assets or asset classes.

February 19th marks another critical day in the wealth management industry here in China as another (completely off-line) fund faces potential default. How the default is handled will be a strong indication of the potential future of the online finance products as well.

More in this category: « Chinese P2P Lending growth coming from Five Most Developed Regions Number of Chinese Online Banking customers Increased again in 2012 »
back to top