Historically in China’s banking industry, there were only state-owned banks, commercial banks (usually at least partially state-owned) and foreign banks. For many years, the industry has been discussing if commercial, completely private banks would be practical in China.

Based on a maturing banking environment and a unmet market needs, in 2015, the government launched the first guidelines to promote private commercial bank development. The guidance was issued by the State Development Planning Commission (国办发 [2015]49号 关于促进民营银行发展的指导意见) and encourages private companies to setup private commercial banks with their own funds in order to help meet the needs of small and medium sized companies that struggled to obtain what they needed from the existing banks.

Of the 17 private commercial banks, 8 have already started their business. 3 of them only focus on online banking and the other 5 have developed both online and offline businesses. 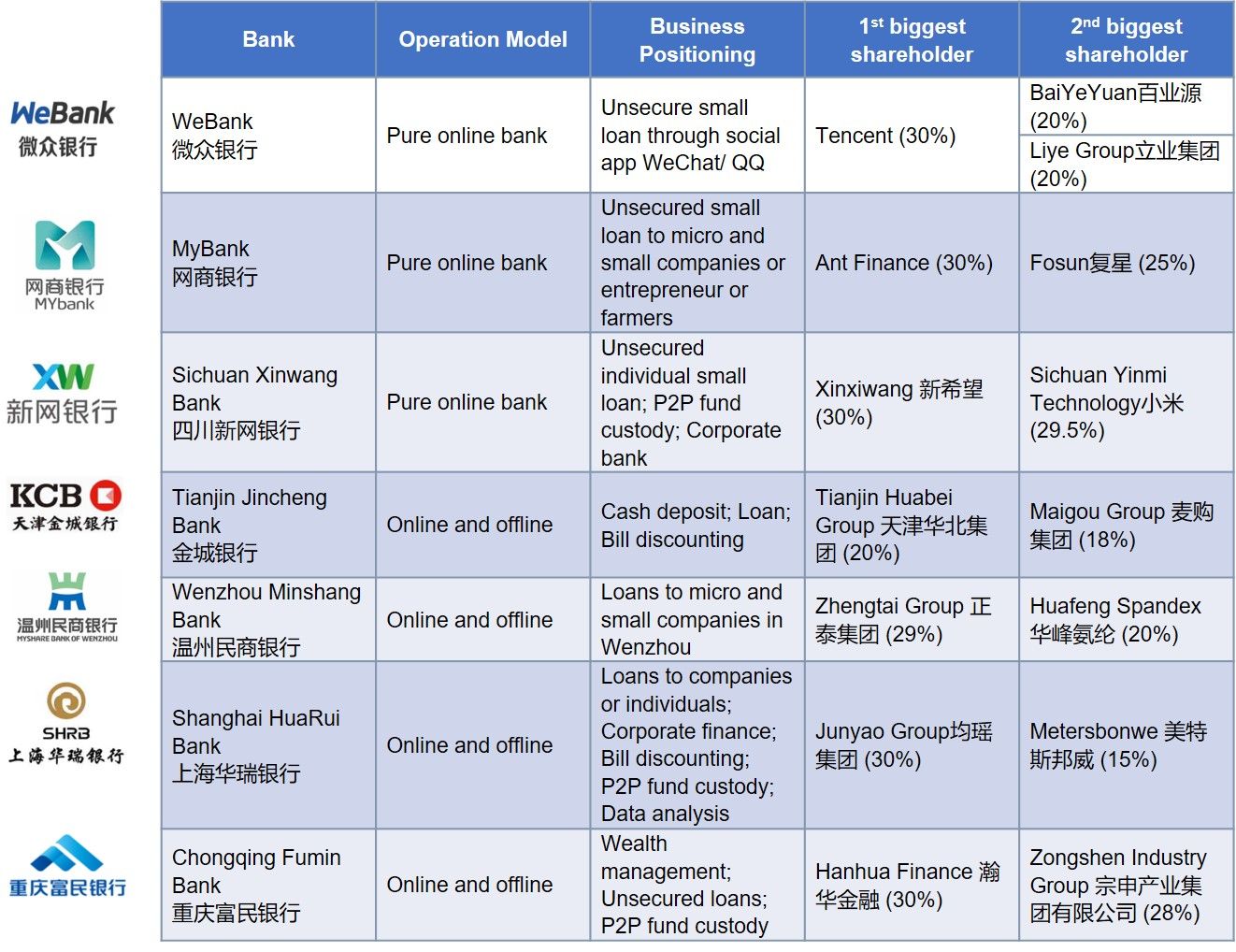 The two key target segments for the new commercial banks are individuals and SMEs, which have both had problems in obtaining financing in the past. The three pure online banks are data-driven banks, focusing on unsecured loans. They take advantage of the data and technology from their shareholders: Tencent, Ant Finance and Xiaomi. Based on this data, the three private commercial banks have a their own methods to evaluate individual credit, then decide how much loan should be issued to the borrower in minutes or even seconds.

The other banks actually run like a rural commercial bank might but with broader client groups and with a bigger focus on technology. Technology is also a tool to help these banks with risk valuation systems and issue loans to new clients without PBOC personal credit records. For example, Wenzhou city is famous for small and medium businesses. Based on this condition, Minshang Bank provides quick and convenient loans to the companies online and offline. As of November 2016, one and half years after registration, Minshang Bank has an asset scale of RMB 5.4 billion (USD 813 million).

It is also a requirement that each private commercial bank has only one branch during the trial period and there is no indication of how long the trial period will be, which can make it difficult to develop business. In rural areas, people trust more in a branch where they can go to and find people to talk to, rather than putting money directly into an invisible online account.

Apart from the above, private commercial banking businesses have also met other challenges. Most of the banks focus on consumer finance or small loans, facing competition from consumer finance companies, internet small loans, P2P etc.. So far, these banks have carved out their little piece of the whole market, which was why the CBRC encouraged their establishment. However, the biggest barrier that prevents banks from issuing credit card or consumer finance loans to an individual is the lack of personal credit data.

With the undergoing personal credit system project by Wanglian and traditional banks’ increasing interest in the similar business, is that possible private commercial banks keep growing? Specially the banks without strong technology backing, can they hold their piece of the market?

More in this category: « Wechat's Loan platform is already on-par with some of the biggest banks in China Government clampdown spurs micro lending reshuffle in China »
back to top