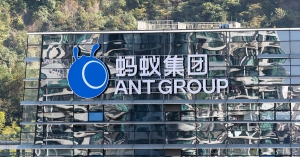 On November 2nd, the People’s Bank of China (PBoC), the China Banking and Insurance Regulatory Commission (CBIRC), the China Securities Regulatory Commission (CSRC) and the State Administration of Foreign Exchange held talks with Ant Group’s management executives, including its founder Jack Ma. The next day, regulators issued new draft rules to tighten China’s rapidly growing online microlending sector. Ant Group’s IPO in Shanghai and Hong Kong was subsequently suspended after Ant said there had been “material changes” in the regulatory stance on financial services, which could result in Ant failing to meet the conditions for listing and providing information disclosures.

China’s regulators are now paying more attention to consumer loans as they worry about “rising defaults and deteriorating asset quality.” In a commentary issued on the same day that Ant’s executives were summoned, Guo Wuping, head of the consumer protection division at CBIRC said that fintech loan companies effectively perform the functions of banks and should adopt similar risk controls.

Leading Players Have Issued Loans to Over 500 Million Borrowers

Ant Group is the biggest online consumer credit provider in China through its Huabei and Jiebei platforms. According to Ant Group’s prospectus, the company managed a combined 2.15 trillion yuan of outstanding loans as of the end of June. About 1.75 trillion yuan of loans issued through the company’s online credit platforms were through cooperation with banks. The online microlending business segment has become Ant Group's biggest income driver, contributing nearly 40% of revenue and 48% of net profits. The other leading players in China’s microloan market are Lufax, and JD.com. Lufax, backed by PingAn Group, started trading in New York at the end of October. In contrast to Ant Group, all microloans funded during the nine months ending September 30 were funded without any joint lending or loan facilitation funding partners.

Ant Group also ranks first in China by number of borrowers. In the 12 months ending June 30th, Ant issued unsecured microloans to about 500 million people through its online credit platforms. The number of yearly active users for JD Baitiao, by contrast, is around 55 million and the accumulative number of borrowers for Lufax is roughly 13 million. The average loan size of Ant’s Huabei is around 2,000 yuan, while the unsecured loan amount of Lufax ranges from 100,000 to 150,000 yuan.

The Draft Rules Look to Rein in Leverage Ratios

This strict restriction on leverage will have a significant impact on Ant Group. Only about 2% of Ant’s 1.75 trillion yuan in outstanding joint loans is kept on the company’s own balance sheet, with the bulk of funding coming from its bank partners. That is far less than the 30% requirement. To meet the new hurdle would mean that Ant Group would have to either dramatically reduce its loan size or increase its capital by billions of yuan.

Ant’s management likens China’s banks to the arteries of the economy, and Ant as the capillaries that send funds to its extremities – small businesses and individuals. The business model works as banks lack both the data to build effective risk control models and the channels to distribute microloans to reliable borrowers. Fintechs, on the other hand, lack access to low-cost funds. While helping to reduce systemic risks within the financial system the proposed new regulations are expected, however, to crimp the supply of funding to small businesses and individuals afforded under such a business model.

According to the draft rules regulators will in principle not approve new microlenders that lend online across regions.

After the issuance of the draft regulations, Lufax’s stock price fell around 10% as its credit loan business is still the company’s main source of revenue. Lufax will have to limit the size of its personal unsecured loans to comply with the new regulations.

Other Provisions Under the Proposed New Rules

In summary, the regulations proposed by the PBoC and the CBIRC stipulate stricter standards for a range of operational and financial metrics including leverage levels, joint lending, and cross-province business.

Regulators have said that the toughened rules aim to "regulate the online microfinance operations of microlenders, prevent risks from online microloans, protect the legal rights and interests of microlenders and clients, and promote the healthy development of the online microfinance business." It is expected, however, that banks will become more cautious in providing joint loans with fintech lenders to small businesses and individuals as a result.

More in this category: « Banks are the major players in the consumer finance field in China for now Postal Savings Bank of China is moving forward with its debut IPO »
back to top
© 2007 - 2021 Kapronasia