A Changing Climate for Banks in China

Nothing is easy in the banking industry, and it's getting tougher in China. The Chinese central bank (PBOC) used to control banks’ lending and deposit interest rate by setting high and low limits, as the top line and bottom line in the chart. If a bank in China can always lend/borrow at the limit rates, the margin would not change much over the years. However, the story is not that simple. 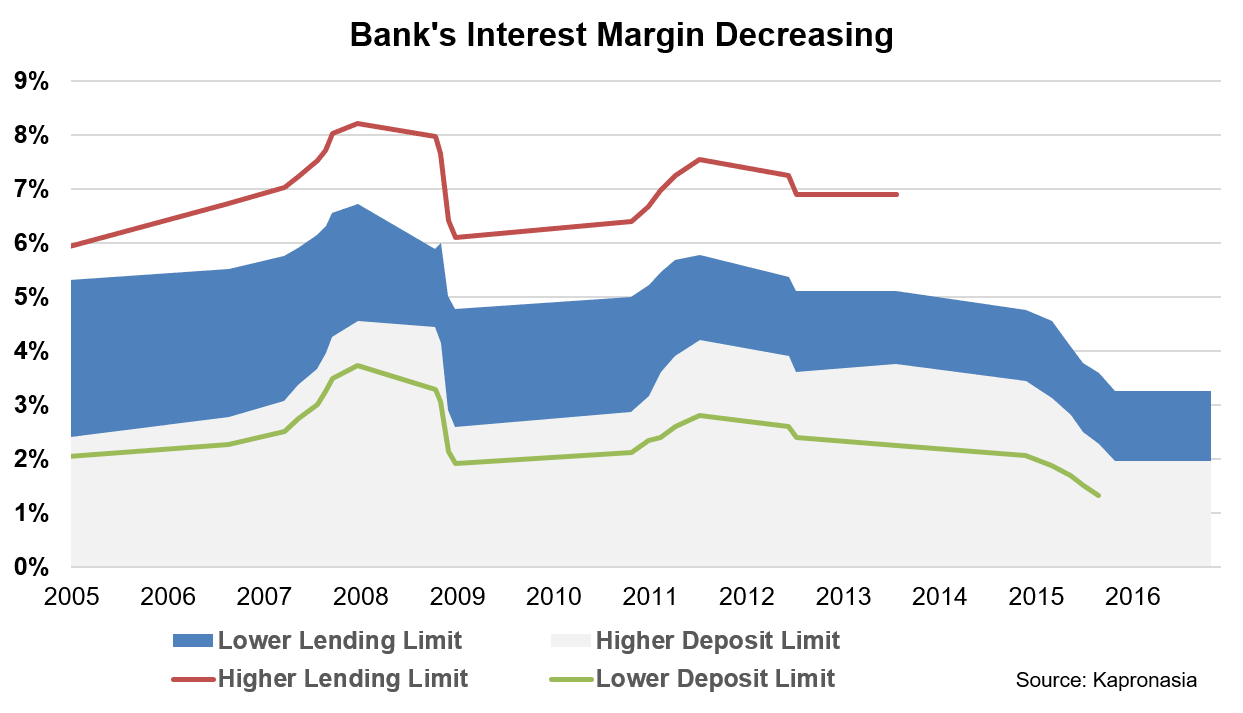 To compete in the market, banks rarely lend at the high or borrow at the low. In another word, banks in China haven't been able to maximize profit in recent years. The reason is not difficult to understand. In order to win over clients with good credit, especially the large-scale state-owned enterprises (SOEs), banks normally have to reduce the lending rate between 5% to 15%.

On the other hand, to attract more deposits from the public, banks also have to increase their average saving rate. Back to the chart, the blue part in the middle shows the real margin for banks in China over the years. We can see the margin for traditional lending-borrowing business has decreased a lot.

Since 2014, when Chinese GDP started to slow, the market has brought more pressure on banks’ lending rate; at the same time, banks are facing more competition from other players such as third party payment companies, online wealth management firms, and consumer finance companies, as well as newly established private banks (set up by private fund and mainly operate online with no offline branches). As a result, banks’ lending/deposit margin may even become less in the future.

What is more, the Chinese economy is transforming from heavy industry to service, from focused on production to consumption. Many SOEs, who used to be banks’ valuable clients, have hit a difficult patch as the government required “reducing the capacity and inventory”. As a result, banks Non Perform Loans (NPL) increased. Also, including preparation of coverage, more of banks’ other performance indicators have gone worse.

Generally speaking, banks are not as profitable as before. “Big Four” (four biggest state owned Chinese banks) used to dominate the market with promised high margin. The tougher market pushes traditional banks transferring their business to other areas. For example, some joint-stake banks increased the percentage of retail banking and other asset light business such as intermediate banking. They are trying to gain more profits at a higher margin without relying on heavy lending. China Merchants Bank (CMB) is a leader in this transformation. Nevertheless, the change is a good sign for consumers. In a more competitive market, consumers have the option to choose better financial services.

More in this category: « New opportunity for foreign banks in China: consumer finance companies Will China's Panda bonds make lunch of Dim Sum Bonds in 2017? »
back to top
© 2007 - 2021 Kapronasia