A look at the increase in the Shanghai Interbank rate

We mentioned earlier this week that there had been a sharp uptick in the Shanghai Interbank rate in the past month. This peaked last night at about 13%. With the attention, rightly so, that this is getting, it's worth taking a look at the issue and what's involved. 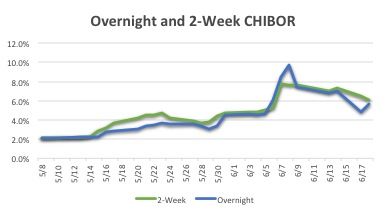