Chinese banks start to push back against money funds 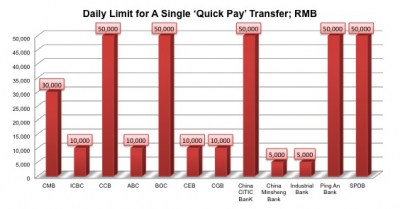 Over the past week news headlines have been awash with how Chinese banks are pushing back against Alibaba's Yuebao and Laicitong as the online finance products have rapidly grown their AUM at the expense of bank deposits. The banks now are expanding their push though and are challenging money funds' market share in China.

Alibaba continues pressing into banking with a virtual credit card 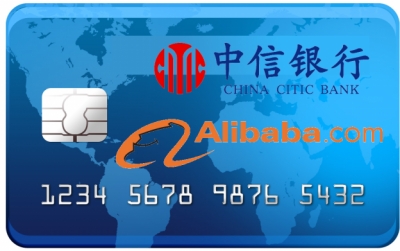 In another foray from the Internet giant into high finance, Alibaba recently announced that one million virtual credit cards will be issued next week.

An interesting graphic from IDC and WSJ looks at the declining growth rate in smartphone sales in China. China's smartphone market is maturing.

Money funds in China have been around for a long time with the first launched just over a decade ago in 2003. For the most part, these funds existed in relative harmony with the banking industry and occupied a small niche in the investment market. However, the emergence of Yuebao in 2013 started to change that. Money funds have now grown significantly in prominence and present an increasing threat to traditional banking services.

The latest figures from the China Banking Regulatory Commission (CBRC) shows that China commercial banks’ deposit net interest margin has been increasing from 2.57% in 2013Q1 to 2.68% in 2013Q4, despite of the pressure from the interest rate liberalization.

Get paid to ride Taxis in China

If you haven’t been following Chinese online finance innovation industry, here’s a quick brief: leveraging mainly underlying high-yield interbank deposits as assets, China’s main internet giants including Tencent, Alibaba and Baidu have launched online finance products where users can quickly and easily move money out of their banks accounts onto these platforms. Tencent uses their nearly ubiquitous Wechat app as the main user interface which Alibaba uses their Alipay platform to distribute the products; the underlying funds are managed by an external asset manager.

The typical returns of Chinese online finance innovations are between 5-8% and greatly eclipse traditional bank deposits, which yield less than 1%. With this kind of return, it’s not surprising that consumers are moving assets over to the platforms at an astonishing rate with some funds accumulating over 400 billion RMB (~US$66B) in AUM in less than a year making the asset managers some of the largest in China.

At the same time, taxi booking apps are growing incredibly rapidly in in China’s eastern coastal cities – some with the support of the internet giants as well. Over US$40 million of investment has gone into the taxi booking apps over the past two years and it’s not uncommon to ride in a taxi where the driver will have 3-4 phones all running the apps on his/her dashboard.

A key part of the internet giants’ strategy has been to bring everything together in one platform. Tencent, already with a significant user base through it’s ‘whatsapp on steroids’ Wechat app allows you to invest in their online finance product called Licaitong and they have integrated a taxi booking app called Didi Taxi where you can ‘tip’ taxi drivers a pre-selected extra amount to come and pick you up.

Money for nothing and your taxi for free

So, all of the above is well and good. Where it gets interesting is the level of competition in the marketplace and what companies are doing to gain marketshare. A Chinese friend related her experience:

So let’s do the math:

So basically, my friend was paid to ride the taxi. She can then take that 11 RMB and instantly put it on her online finance account where she’ll earn about 6% and the internet giants are out a combined 25 RMB.

Of course in the internet space, we’ve seen plenty of companies providing products or services for free or nearly for free, but the scope with which this is happening in China is amazing. And it’s happening more and more.

Take your lessons to go

Time is compressed here. Group buying developed over years in the US and took another couple to fade away. In China, it was started and finished in less than 3 years. Will taxi booking and online finance be similar?

Although both products are essentially in the middle of a ‘perfect storm’ of a huge potential user base, very tight liquidity (giving high overnight lending / fixed deposit rates) and tremendous mobile and internet penetration and momentum, the winds are shifting in terms of innovation and it has put fear into the financial industry.

Both banks and securities firms are feeling the pinch from internet finance. Banks are facing eroding deposits in the face of gradually liberalizing interest rates, while brokers and asset managers are seeing their customers move to relatively high-return products that carry very few fees.

Although the same ‘perfect storm’ may not be happening in the west, paying attention to how things are developing in China is important as more Walmarts and Tescos move into the banking space. Not that banks were ever really known for innovation, but here in China, it's clear that the innovation is certainly not - which is putting them in an increasingly tight position.

Bad loans rise in both amount and proportion in China

According to the latest figures from the China Banking Regulatory Commission (CBRC), both commercial banks' balance of Chinese bad loans and the ratio of bad loans increased throughout 2013.

The continuing increase of bad loans is an indication of the challenges in China's economy currently. With an economic transition happening and increased lending on bad loans, this is not likely to decrease in 2014 which will pose even more of a challenge for banks as they face increased interest rate liberialization and other financial industry reform. 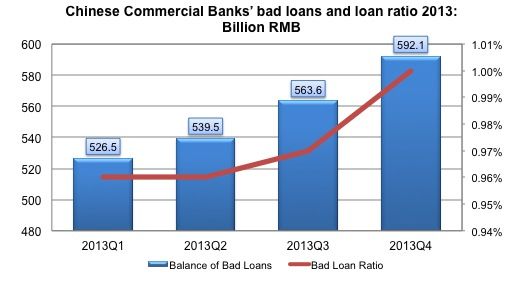 Research shows that the decreasing trend of Chinese commercial banks’ profitability growth rate seems to be in line with China’ declining GDP growth rate, shown in the chart below. It reflects that with the acceleration of interest rate reform and the influence from internet finance, China’s commercial banks profit margin faces continuing pressure. 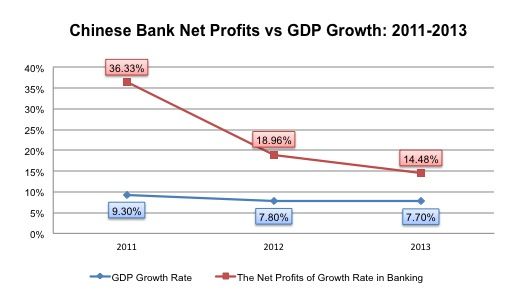 Not satisfied with just taking deposits from banks, online finance platforms are facing more competition from each other.

Thank you to everyone who attended the Top-10 China Financial Technology trends webinar just over a week ago.

The sheer size of China's population and geography means that you get some pretty amazing statistics out of it. Couple that with increasing internet and mobile penetration and you have some pretty sizable numbers.

For decades, China has been known as the imitator and not the innovator. The argument goes that the West came up with social networking, mobile payments, group-buying, etc. and China imitated it, sometimes better, sometimes worse. C2C – copy to China. R&D – rob and duplicate. There are numerous terms to describe it.

After 18 years of economic development, China’s Tier 2 Banks, mainly city commercial banks, are growing to fill a gap in-between state-owned banks, and rural commercial banks. As part of their growth, many city commercial banks are attempting to expand their branches in other regions, however, the Chinese Banking Regulatory Committee (CBRC) regulations are, in certain cases, holding them back.

Because the asset scale and business model vary based on the local economies in each city, the evaluation regulation will be different. If the investment in other regions is excessive, the CBRC will require a higher capital adequacy ratio; if the risk management does not match the fast growing asset scale, the CBRC will restrict the expansion of these city commercial banks. Thus, regulators support supra-regional expansion if the tier 2 banks meet the entire set of regulatory requirements.

China’s tier two banks are some of the more dynamic banks in China in terms of business models and innovation – they have had to be in order to compete with their larger counterparts that typically have much larger deposit bases and distribution networks.

The tier-2 banks are still focused on expanding their asset base and while supra-regional expansion will help them accomplish this, it is not the ultimate goal of the banks, at least not in the near future. The regulations do serve a valuable purpose to ensure that banks’ expansion is based on quality assets and business practices.