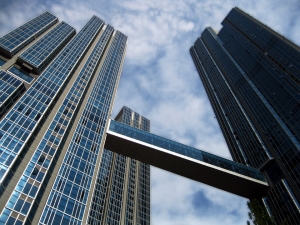 South Korea is eager to introduce more digital applications into its financial system, but unsure how far it wants to go with digital currency. That goes for not just crypto, but central bank digital currency as well. For now, payments is one fintech segment in which South Korean tech giants are poised to launch new applications.

In late April, LG announced that it is testing an AI and blockchain-powered facial-recognition payment method, which it believes is more efficient than QR codes. This method of payment works by scanning the face of the person paying for a transaction. Payment is then automatically deducted from that person's cryptocurrency wallet. For now, LG plans to implement the facial-recognition payment system in one of its employee cafeterias. If the system is successful, LG may try to launch it commercially in South Korea.

LG has also installed facial recognition door access at its Seoul headquarters. It operates in a similar manner to the payments technology, but is stricter: People who are not wearing protective face masks properly are automatically denied entry.

As a safety measure, such technology undoubtedly has an advantage, especially amid a devastating pandemic. In the coronavirus's world, privacy takes a back seat to health and safety concerns. Facial recognition payments have the benefit of being entirely contactless. Still, widespread use of facial recognition technology could be a slippery slope. The pandemic will eventually ebb. At that point, it may be harder to overlook privacy concerns.

Separately, amid rising global interest in CBDCs, the Bank of Korea plans to explore issuing a digital fiat currency of its own, a reversal of its previous stance. In early April, Korea's central bank announced a 22-month digital fiat currency pilot which will be carried out through the end of 2021.

South Korea's digital currency about-face seems linked to actions by its close economic partners, the U.S. and Japan. "The U.S. and Japan had no plans to issue a CBDC in the near future, but they changed their stance recently to enhance research in the emerging area," a BOK official told The Korea Times.