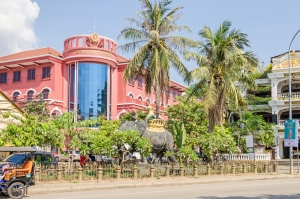 The National Bank of Cambodia will become one of the first banks in the world to integrate blockchain technology into its national payments system in the second half of the year. The Cambodian government aims to use distributed ledger technology to strengthen banking system efficiency and boost financial inclusion in what is still one of Asean's poorest countries.

Cambodia is among the most underbanked countries in Asean with just 5% of its people holding a bank account compared to a regional average of 27%, according to KMPG. Yet about 60% of the population has internet access - about 9.6 of 16 million people. Blockchain-based financial services could fast take root in Cambodia given the lack of entrenched incumbents, the population's openness to banking online and the government's support for the technology. A blockchain-based payment system could help to consolidate the fragmented Cambodia payments market.

The National Bank of Cambodia is not planning to use blockchain technology to support cryptocurrency, according to The Phnom Penh Post. Rather, the Cambodian government sees blockchain as able to lower costs related to interbank lending. If the experiment is successful, "it would greatly enhance the central bank’s ability to facilitate and monitor interbank lending and transactions," an official at the bank told The Post.

In 2017, when Cambodia first announced its central bank would develop blockchain applications, the bank's director-general Chea Serey told The Post: "A cashless system is less costly and more transparent for the whole economy. This has always been on our agenda, but we needed time to study the different platforms available [before making a decision].”

Research by the Asian Development Bank (ADB) suggests that overall, fintech could have a transformational effect on Cambodia's financial system. ADB forecasts that fintech could boost electronic payments by US$1 billion and credit by US$2.5 billion.

More in this category: « Security Token Offerings: the new kid on the block(chain)? Crypto prospects look dim in India following Modi's reelection »
back to top