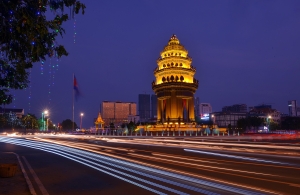 Cambodia has become the first country in Southeast Asia to launch a blockchain-based payment platform backed by its central bank. The Cambodian government is calling the platform, known as Project Bakong, a "retail central bank digital currency." Co-developed with the Japanese fintech firm Soramitsu, Bakong enables transactions in both Cambodian riel (KHR) and US dollars and works with Cambodia's existing payment systems. The Bakong app allows users with a Cambodian phone number and bank account to set up a digital wallet in either Riel or US dollars, transfer between accounts and make payments with a phone number or QR code.

Bakong could be a game changer for Cambodia, positioning the country at the forefront of digital banking in Asia alongside China. However, Bakong is not "native digital like" China's DCEP (digital currency electronic payment). Instead, Bakong represents a tokenized version of Cambodian riel or US dollars in the reserves of the National Bank of Cambodia.

Bakong looks to be more evolutionary than revolutionary. In a press release, Soramitsu said that Bakong would not alter the fundamental structure of Cambodia's financial system, adding that, "because all digital Riel and USD wallets are backed by assets held at the central bank, bank runs are no more likely and liquidity risks are minimal."

One of the main reasons the Cambodian government launched Bakong is to boost financial inclusion through cashless payments in the riel. The Kingdom has a large unbanked population, estimated by the World Bank to be 78% of Cambodians aged 15 and up. Bakong's architects expect that it will lower barriers to financial inclusion and encourage banks to develop new services for underserved markets, especially the country's large digitally savvy youth population. Cambodia is a young country overall, with a median age of 25.

Bakong also has the advantage of connecting all of Cambodia's financial institutions and payment service providers under a single payment platform. The peer-to-peer aspect of Bakong eliminates the need for a centralized clearing house and the associated inefficiencies. Meanwhile, there are no transaction fees for users. 18 financial firms have joined Bakong so far, while 24 additional firms have been granted membership in principle and are "reviewing technicalities involved in connecting to the system," Cambodia Microfinance Association chairman Kea Borann told The Phnom Penh Post.

At the same time, the arrival of the blockchain-based payment system signals Phnom Penh's intentions to wean its economy off dependency on the US dollar, a long-running goal. The National Bank of Cambodia estimates that in 2019 riel circulating in the country rose 33% year-on-year and riel deposits increased 37%, while dollar deposits fell 2%.