Crypto is making inroads in the Philippines 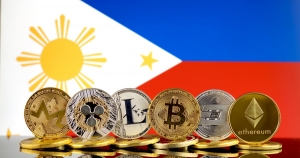 The Philippines is taking a different approach to crypto than many other Asian countries, most notably in a tentative acceptance of the use of decentralized digital currencies for payments. Thailand, Vietnam and Indonesia have all banned crypto for payments outright, while Singapore has licensed just a handful of companies to use digital assets for payments.

In the past few years, digital assets use in the Philippines has increased briskly. Transactions in virtual currency rose by 71% to almost P106 billion (US$2 billion) in the first half of 2021, compared to P62.1 billion (US$1.2 billion) in the same period a year earlier, according to BSP. Nearly three out of ten Filipinos either own or use a digital coin and the Philippines ranks third in a list of 56 countries using crypto, according to Statista Global Consumer Survey.

In April, Philippine unicorn Voyager Innovations’ PayMaya (now rebranded as Maya Bank) launched a cryptocurrency feature on its app, enabling users to buy and earn digital assets. PayMaya is both an electronic money issuer and virtual asset services provider licensed by the BSP.

Some analysts argue that in Asia, developing countries are more open to crypto than developed ones, but that is not necessarily true. As mentioned above, three of Southeast Asia’s most prominent economies – all developing countries – do not allow digital assets to be used for payments. Nor do China or India, for that matter. Yet Japan, the richest country in East Asia, has recognized Bitcoin and some other cryptocurrencies as a valid form of payment since 2017.

In the Philippines’ case, regulators may not see a large systemic financial risk from crypto payments – despite the volatility of Bitcoin and other cryptocurrencies – and seem to be more focused on boosting financial inclusion through digital means. The Philippine central bank has set a target of 50% digital retail payments by 2023, which though ambitious has gotten a big boost from the pandemic-induced shift to online payments.

In January, BSP Governor Benjamin Diokno expressed confidence the digitization target would be reached achieved by the end of his term next year. "With all these digitalization initiatives in the pipeline, the enhancements to the existing payment streams, and the continued expansion of the e-commerce industry in the country, we remain optimistic that the 50% digital payments target by end-2023 is very much doable," he said.

At the same time, the Philippines is one of the world’s largest remittance markets, third after India and China. In 2021, remittances to the Philippines reached a new high of US$31.4 billion, up 5.1% from $29.9 billion in 2020. Crypto can likely support and help grow the already enormous Philippine remittances market.