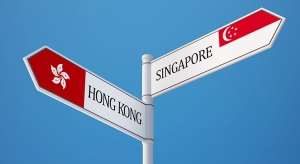 Hong Kong as Asia’s top crypto hub? Really? That is our reaction to the speculation that the Chinese SAR could beat out Singapore for Asia’s crypto crown that has emerged since Hong Kong officials at Hong Kong Fintech Week announced a public consultation on how retail investors could have a suitable degree of access to digital assets under a new licensing regime. Rules currently limit crypto trades to institutional investors with a portfolio of at least HK$8mn ($1mn). Yet it is hard to see how Hong Kong can chart such a markedly different course on crypto than mainland China.

In recent years, Hong Kong’s economy has become ever more closely connected with the mainland. Though their respective financial systems remain distinct and Hong Kong is allowed to do many things the mainland cannot, we are skeptical that the central government would endorse the city as a hub for something it views as a serious money laundering and systemic financial risk.

Perhaps Hong Kong officials have convinced their mainland counterparts that crypto is actually harmless, or that it can somehow be regulated in the city in a way acceptable to them. To be sure, lots of crypto is still being traded in China underground – but it is hard to see how that translates into Hong Kong being endorsed by the central government as a retail investing hub for decentralized digital currencies.

China is East Asia’s largest cryptocurrency market in terms of transaction turnover and ranks fourth worldwide, according to blockchain research firm Chainalysis. China recorded more than US$220 billion in total transactions between June 2021 and July 2022, surpassing those of South Korea and Japan in the same period.

For its part, Singapore is treading cautiously when it comes crypto for retail investing because there is not a lot of upside to doing otherwise. We cannot blame Singapore for not wanting to be a hub for the mercurial world of crypto retail investing – and all the unsavory elements with which it is associated. Besides, Monetary Authority of Singapore (MAS) head Ravi Menon said at the Singapore Fintech Festival that the city-state remains interested in crypto for many applications: programmable money, atomic settlement and tokenizing real and financial assets to increase efficiency and reduce risks in financial transactions. He only rejected the idea of trading and speculating in cryptocurrencies because “that is not the kind of crypto hub we want to be.”

It is also important to keep in mind that Singapore has been steadily developing itself as a crypto hub for institutional investors over the past few years, while Hong Kong has been struggling to step out of the mainland’s shadow.

More in this category: « Southeast Asian countries have no reason to rush to launch CBDCs How will FTX’s implosion affect the crypto market in Asia Pacific? »
back to top