Will cash be a thing of the past in Thailand's future? 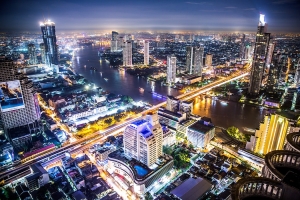 For Thailand, at first blush going cashless seems like a long shot. Cash accounts for 90% of overall transactions in the kingdom, despite 67% of Thailand's population using mobile payments in 2018. Thailand would need to maintain its rapid growth in digital payments over the last two years to make the transition from cash reliant to predominantly digital.

Yet there is reason for optimism about Thailand's cashless push. Thailand has a young, tech-savvy population, a high rate of smartphone penetration (74%, ahead of Sweden and China) and excellent mobile connectivity.

Thais love shopping online too. Research by Google and Temasek shows that Thailand's e-commerce market will grow to US$11.1 billion in 2025 from just US$900 million in 2015, a compound annual growth rate of 29%. If that prediction holds true, Thailand will become Asean's No. 2 online shopping market after Indonesia, even though the Thai population is just over one-fourth the size of Indonesia's 264 million.

Meanwhile, a commanding 68% of Thai respondents to a 2018 Visa survey about consumer views on cashless payments said that the kingdom would become cashless by 2025, compared to just 35% in 2017. There were 500 Thai respondents to the survey, which tracked the payment behavior of 4,000 consumers in eight Southeast Asian nations.

The study found that 40% of respondents said that they carried less cash than two years ago, primarily for reasons of safety and a preference for the convenience of digital payments.

A big driver of Thailand's embrace of cashless payments was the Thai government's introduction of the money transfer and payment scheme PromptPay in 2017, analysts say. Following the launch of PromptPay, Thai banks jettisoned transaction fees. A surge in online transactions followed. As of early July, there were 49 million registered PromptPay users and 5 million merchants providing QR code payment service, according to a July report in The Bangkok Post.

"More than ever before, Thai consumers can make payments with a wider range of connected devices and payment applications on smartphones, such as wearables and mobile payments," Suripong Tantiyanon, Visa Thailand's country manager, said in the report. "At the same time, QR code offers merchants in traditionally cash-based segments a fast, cost-effective and secure digital payments solution."

In addition to the broader initiative to promote cashless payments among Thais, there's another reason for the kingdom to be QR Code friendly: It wants to attract Chinese visitors, who are accustomed to paying for everyday transactions at home with their handsets. The Chinese are Thailand's top tourist market, accounting for almost 58% of all visitors to the country. They are also the biggest spenders among tourists, spending $192 a day.

More in this category: « How is China influencing Cambodia's fintech development? WhatsApp eyes Indonesia payments market »
back to top