WeChat sees Malaysia as its gateway to Southeast Asia 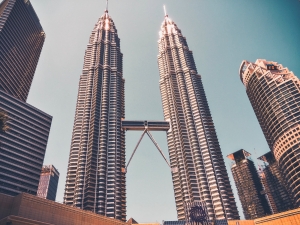 The WeChat super app is perhaps the best example of a made-for-China digital ecosystem that struggles beyond the Great Firewall. It's essential in China for communication with colleagues and friends, ride hailing, day-to-day purchases and online banking. WeChat puts all that and more at your fingertips - and it's not like you have a choice anyway. The competition is blocked. But outside the Chinese mainland - where there are lots of other messaging apps - WeChat's only good for one thing: keeping in touch with people back there.

That's why WeChat has not to date gained much traction outside its home market. Even Hong Kongers and Taiwanese are ambivalent about the app. The former prefer WhatsApp and the latter Japan's Line.

Those markets are almost certainly lost causes for WeChat, which is instead turning its attention to underbanked Southeast Asia, where its strong fintech capabilities could boost financial inclusion. Malaysia, home to a significant Chinese diaspora population and historically close with China, is integral to WeChat's expansion in emerging markets.

If WeChat Pay could become a leader among Malaysia's digital wallets, it would mark a watershed moment for China's fintech giants, showing that their digital banking services could work for non-Chinese customers. Malaysia might even serve as a springboard to the wider Asean region.

"I believe tech companies like WeChat can help digitalize payments in Malaysia and create an environment conducive for big data analytics and other technologies relevant to Industry 4.0," Malaysian Finance Minister Lim Guan Eng was quoted as saying by state media China Daily in a March report.

WeChat Pay was launched in Malaysia last August and has grown considerably in the Malaysian market since then, according to the report. About 3,500 Malaysian merchants accept WeChat Pay.

There's definitely Chinese tourism business for WeChat in Malaysia. The Southeast Asian country attracted 2.9 million Chinese visitors last year, an annual increase of almost 29%. China has grown to be Malaysia's No. 3 tourism market after Singapore and Indonesia, according to the Malaysia Tourism Promotion Board.

Locals are another story. To be sure, WeChat has 20 million users of its messaging app in Malaysia. But how is it going to convince them to use the app for banking? It has tried some cash-back offers, coupons and other promotions. Those are not as persuasive for Malaysians as they are for Chinese though.

Further, unlike the Chinese, Malaysians are established credit and debit card users. Malaysia only has 31 million people, but it has 42 million active debit cards and 11 million credit cards. Back home, WeChat never had to contend seriously with credit cards. Many Chinese consumers have skipped them entirely, preferring the convenience of a stored-value mobile banking ecosystem. The Chinese aversion to accruing debt - essential to credit cards' bottom line - has worked in WeChat's favor.

Working with local partners who understand the Malaysian market will be crucial to WeChat Pay's prospects there. The company is reportedly working with some local heavyweights, says Asean Today, which include Petron Malaysia, Hong Leong Bank, and Genting Resorts. At the same time, WeChat Pay is also inking partnerships with traditional Malaysian businesses like street-food vendors, night markets and sweets sellers.

That's a sound strategy. Indeed, WeChat Pay faces more competition in Malaysia than back home. Compared to China, Malaysia's digital wallet market is less consolidated. There are five strong players: GrabPay, Boost, Touch’N’Go, WeChat Pay, and Maybank QRPay. WeChat Pay is the only one not based in Southeast Asia. In contrast, WeChat Payis accustomed to competing primarily with Alipay in its home market. That mobile wallet duopoly keeps China's digital wallet space in an odd equilibrium. Within Tencent's ecosystem, one uses WeChat Pay or TenPay. In Alibaba's, one uses Alipay. The two internet giants have roughly an equal share of the market.

To win local business in Malaysia, WeChat will ultimately have to work harder than it did in China. The company will need to offer a compelling value proposition, emphasizing convenience, security and financial benefits, rather than just be present at a point of sale - which is often enough for Chinese tourists.

More in this category: « Despite digital, Singapore uses cash more than you think Can Malaysia's Boost keep winning mobile wallet share? »
back to top