Thailand’s fintech sector begins to come into its own 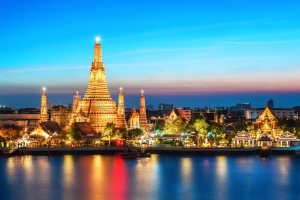 Compared to many of its neighbors, Thailand has been digitizing its financial sector at a slower pace. Southeast Asia's second-largest economy has no digital banks – not even any framework for digital lenders – and until recently, no fintech unicorns. Ant Group-backed Ascend Money is Thailand’s first.

Fintech has not grown as fast in Thailand as other Southeast Asian countries because there is neither a pressing need for digital financial services – nearly 82% of Thailand’s population has a bank account – nor is the country a regional financial hub like Singapore. Thailand thus has not cultivated as deep a fintech ecosystem as some of its neighbors. Covid-19, however, has been a catalyst for faster adoption of digital financial services, and Thailand’s fintech scene is starting to heat up.

The most obvious example is the rise of Ascend Money, the Ant Group-backed fintech startup known of its e-wallet TrueMoney. In late September, Ascend Money announced it had raised US$150 million in a Series C round that valued it at US$1.5 billion, making the company Thailand’s first fintech unicorn. With a regional focus that includes Indonesia, Vietnam, Myanmar, Cambodia, and the Philippines, Ascend Money has significant potential to grow. It plans to use the money from its Series C round to develop a wide range of services, from lending to investment to cross-border remittances.

Ascend Money has been around since 2013 but not really hit its stride until the past few years. From 2019-2020, total payment volume across its six Southeast Asia markets grew 84% to US$14 billion, according to the company. 70% of its business comes from Thailand and 30% from the rest of the region.

As of early 2021, TrueMoney e-wallet had 17 million users. User and transaction growth, however, have grown briskly this year as Thailand has battled a truculent coronavirus outbreak. The kingdom made it through 2020 relatively unscathed by the virus but was hit hard by the Delta variant in the spring of 2021 and continues to average around 10,000 cases a day as of early October. Tanyapong Thamavaranukupt, co-president of Ascend Money, recently told TechCrunch that company’s users in Thailand had increased to 20 million by late September from early this year while online payment transactions had risen 75% over the same period.

Meanwhile, some of Thailand’s largest incumbent lenders are stepping up their digital game. In late September, the kingdom’s No. 3 lender Siam Commercial Bank announced a tie-up with the leading mobile service provider Advanced Info Service (AIS), which has 43 million subscribers in Thailand. They plan to jointly provide online lending services. It is the first partnership of its kind in the country.

In October 2020, the Japanese messaging app Line and Thailand’s Kasikborn Bank established a join venture, Line BK, known as the "social banking" arm of the Line app in Thailand. As of early 2021, it had accrued 2 million users in the country. Line and Kasikorn Bank's JV offers debit cards, lending services to retail users and deposit accounts offering interest rates of up to 1.5% annually.

More in this category: « BNPL is ascendant in India Taiwan takes a cautious approach to BNPL »
back to top