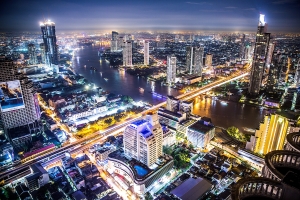 Cambodian and Thai regulators recently announced the launch of an interoperable payment QR code for use between Cambodia and Thailand. Cambodian tourists who visit Thailand may now use their mobile banking app to pay in Cambodian riel when shopping at stores that display a Thai QR Payment sign, while the same functionality will be extended to Thai tourists in Cambodia by Q3 this year.

A collaboration between the Siam Commercial Bank (SCB) and five Cambodian commercial banks, the interoperable QR code was developed upon domestic electronic transfer system PromptPay which runs on Vocalink infrastructure. ACLEDA Bank PCL, Cambodia Commercial Bank (CCB) and the Foreign Trade Bank of Cambodia (FTB) are sponsoring banks of the collaboration, which mean that other banks would be required to work with the three in order to provide the service.

Thailand is proving to become a leader in QR cross-border payments. Thailand’s fifth largest bank by assets, the Bank of Ayudhya (BAY), worked with Japanese majority shareholder Mitsubishi UFJ Financial Group to launch a cross-border QR code system. Customers of BAY were able to use their Thai QR code with any banking app to process purchases at leading shopping malls across Japan.

Not two months later, SCB signed a memorandum of understanding with the second-largest bank in Myanmar, the Ayeyarwady Bank, to develop cross-border payments and fund-transfer services for workers and SMEs in the two countries. The Bank of Thailand hopes to begin operations for these projects beginning mid-2020.

More in this category: « 2020 Top Ten Asia Fintech Trends #6: Japan goes all in on cashless payments Tencent and Alibaba duke it out in the Middle East »
back to top