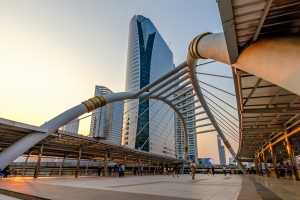 Mobile payment adoption is accelerating in Thailand as the finance sector moves to digitize. Like its Asean peers, Thailand is keen to use digital finance to boost an underdeveloped banking sector. Without the entrenched incumbents of developed economies, Asean countries tend to view digital finance as a greater opportunity than threat. Even highly advanced Singapore has embraced fintech, with an eye towards becoming Southeast Asia's fintech hub.

Thailand is notable for its incorporation of mobile wallets into a broader digital ecosystem. Thailand-based TrueMoney Wallet, which began as a provider of simple digital payment services, like paying for purchases and bills, has diversified into cross-border remittances, cash on delivery and top-up services such as gaming. Japanese messaging app Line, which counts Thailand as one of its top markets, currently offers its Rabbit Line Pay service to 4.5 million Thai users. With an overall Thai userbase of 15 million, Line has plenty of room to grow its payments business in Thailand.

At the same time, the Thai government is playing a key role in the digitization of the nation's finance sector. In line with the Thailand 4.0 initiative, the government launched PromptPay, an electronic interbank transfer system in early 2017. According to The Bangkok Post, PromptPay registration reached 44.5 million users in August 2018. Total transactions reached 631 million, with an overall value of 3.1 trillion baht.

Analysts say waiving transactions fees helped spur a surge in PromptPay usage. After the fees were waived in March, interbank fund transfers from April to June grew 239%. Most of the transactions were conducted with smartphones.

More in this category: « Japan's convenience stores cash in on cashless payments Can Japan's Line make fintech pay like WeChat has? »
back to top
© 2007 - 2021 Kapronasia