Thai fintech Lightnet raises US$31.2 million in Series A funding round 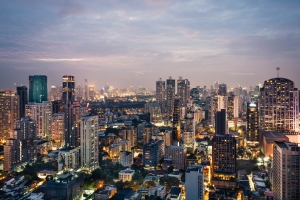 The private-equity unit of United Overseas Bank has co-led a US$31.2 million Series A funding round for the Thai fintech start-up Lightnet along with South Korea's Hanwha Investment and Securities and Japan's Seven Bank. Other investors included Singapore's Hopeshine Ventures, Signum Capital and Du Capital as well as Taiwan-based Uni-President Asset Holdings and Zhejiang-based HashKey Capital. Lightnet was co-founded by Chatchaval Jiaravanon, a member of the family that owns Thailand's Charoen Pokphand Group, and Tridbodi Arunanondchai, a tech entrepreneur and former investment banker.

Lightnet is billing itself as able to offer the "financial ecosystem of the future." Naturally, that's going to be based on the blockchain. What isn't, after all? In Lightnet's case, it's the Stellar blockchain used for the cryptocurrency Stellar Lumens.

"We launched Lightnet to offer low-cost and instantaneous financial inclusivity and mobility to the four billion lives across Asia Pacific -- all powered by Stellar's fast, scalable, and sustainable blockchain technology," Chatchaval Jiaravanon, Lightnet's chairman, said in a statement.

The Thai fintech startup sees a huge business opportunity among the millions of unbanked migrant workers across Southeast Asia who currently rely on traditional remittance methods or underground banking. Lightnet reckons the market is worth US$150 billion and is eager to embrace smart contracts and distributed ledgers.

Clearly, Lightnet is aiming high. Announcements about its Series A fundraising round include a description of the company as the "Asian version of Libra for the underbanked population" (on Medium.com) and in its own press release a direct challenge to SWIFT, described as a "decades-old, inefficient system." Lightnet forecasts that it will facilitate more than US$50 billion worth of annual transactions through its network within three years. It's a heady goal, but unsurprising given the lofty aspirations of fintech startups and their deep-pocketed investors.

To be sure, Lightnet could disrupt the conventional global remittances market, even if it doesn't put SWIFT out to pasture anytime soon. As Forbes recently noted, Lightnet's backers include six large conglomerates based in Asia with an expansive retail and banking network. It's likely Lightnet will tap that network to facilitate customers sending and receiving money. Seven Bank is the owner of Japan's 7-Eleven stores and more than 69,000 outlets globally. Uni-President Asset Holdings is part of Taiwan-based Uni-President Enterprises Corp., which owns 9,000 7-Eleven and Starbucks in Asia. Hashkey Capital is the investment arm of WanXiang Group, a Chinese automotive and financial conglomerate.

Lightnet plans to use the cash from its Series A fundraising round to support investment in Stellar Network's underlying blockchain technology and "to build a next-generation financial mobility network," according to its press release.

Tags:
More in this category: « Vanguard to offer retail investment advisory to Chinese consumers through partnership with Ant Financial WeChat Pay gets the green light to operate in Indonesia »
back to top