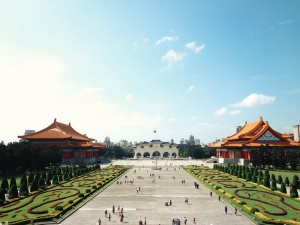 Taiwan has only recently begun to kick its cash habit. For years, small merchants on the island would only accept bills and coins. Some still don't take plastic and mobile payments. Many do, but there's a catch: They tell the customer goods are pricier if paid for with a credit card. They aren't supposed to pass on the merchant fee to the customer - it's technically illegal - but local consumers aren't likely to file a complaint with the authorities.

Unlike in mainland China, where direct debit from an Alipay or WeChat account tied to a bank account is the norm, Taiwanese consumers often prefer using credit cards in their digital wallets. In Taiwan, it's often not a question of mobile payments or plastic, but rather how to best integrate them. Line Pay, the current market leader in mobile payments, has inked a slew of deals with local banks and global credit card companies.

In 2018, credit card spending in Taiwan reached a record high for the fifth year in a row. Total credit-card spending hit NT$2.9 trillion, up about 10% from NT$2.6 trillion a year earlier. Mobile payments and their credit card-linked marketing programs were a major driver of the trend last year. 44 million credit cards circulate in Taiwan; that's about 1.9 cards per person, given Taiwan has a population of 23 million.

Encouraged by the organic growth in cashless payments, the Taiwanese government is rolling out a series of incentives to persuade cash-loving holdouts to hop on the digital bandwagon. The government is aware that parsimonious small merchants are loath to invest in new digital payments infrastructure.

The problem can be solved, of course, if the government absorbs some of the associated costs. Fortunately, that's exactly what it plans to do. Under the three-part project, it will spend NT$1.5 billion (US$47.8 million) on initiatives like helping small and medium-sized stores in commercial areas build digital systems and improve their services. Phase 1 of the plan will kick off in October, requiring NT$990 million from state coffers. Over a three-year period, about 10,000 stores will receive an annual subsidy of NT$30,000.

Additionally, the government will cooperate with mobile payment operators (notably Line Pay) to redeem points or offer 20% cashbacks to consumers who swipe their smartphones to pay for transactions in designated commercial areas with a high concentration of small merchants, including Yongkang Street and Ningxia Night Market in Taipei City.

More in this category: « Why hasn't WeChat Pay caught on in Taiwan? Fintech in name only »
back to top