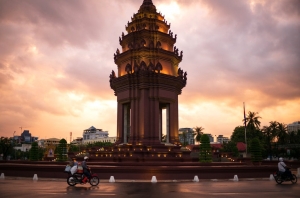 Pi Pay is the largest digital wallet in Cambodia's nascent fintech space, having processed 7.5 million transactions of $170 million as of March. The company has 250,000 users and 3,500 merchant partners.

For Liiv, the tie-up with Pi Pay will serve as a springboard into the wider Asean region. "KB Kookmin Bank's Liiv will seek to forge ties with various Southeast Asian market leaders to further foray into retail banking in the region with success," Choi Chang-su, managing director of the bank's global business, said in a statement.

With its stable of strategic partners, Pi Pay is positioning itself as a one-stop shop for fintech in Cambodia, advocating strong support for government initiatives such as financial inclusion and boosting cashless payments. The company aims to lead Cambodia's transition "from a cash-only to a digitally friendly nation for entrepreneurs and society," chief commercial officer Paul Freer told e27.co in an October interview.

Further, Pi Pay seems to be replicating the strategy of China's fintech giants as it targets a wide variety of points of sale across Cambodia. Rather than focus on a specific market segment, such as mom-and-pop stores, or high-end retailers, Pi Pay is going for them all. The app can be used at roadside coffee stalls, global branded retailers, to pay utility bills or to book an event, the company's CEO Tomas Pokorny told The Phnom Penh Post in March.

Pi Pay is also working with the Cambodian government. In June 2018, the company entered into an agreement with the Ministry of Public Works and Transportation to provide cashless solutions to its many public services. The tie-up will pave the way for people to be able to pay for all public transportation and vehicle registration payments with their mobile phones.

More in this category: « Taiwan's homegrown JKoPay surges in island's mobile payments market Will fintech save Go-Jek and Grab from Uber's fate? »
back to top