Jkopay aims to build a digital banking ecosystem for Taiwan 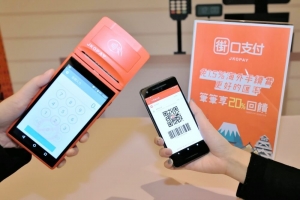 Jkopay has been one of Taiwan' top e-wallets for several years now on the back of its strength with small merchants. Many erstwhile cash-only mom-and-pop shops now accept Jkopay as well. Given Jkopay's payments success, the company naturally wants to expand into other online banking segments. Kevin Hu, Jkopay's founder and chief executive officer, recently said that he hoped to build a more complete digital financial services ecosystem that would include deposit-taking, lending and investment services. Hu likened his vision to a "version of Ant Group for Taiwan."

For several years now, Jkopay has been trying to develop a broader suite of digital financial services. The thin margins from payments have failed to make the company profitable. Unfortunately, in Taiwan's conservative financial environment, fintechs have limited space to develop.

Jkopay has struggled to get its Tuofu Bao investment service off the ground. The idea is simple enough: Tuofu Bao lets users of the e-wallet invest in a fund managed by the asset management company Jko owns. Jko says that Tuofu Bao offers a better return on investment than a bank's term deposit, reportedly 1.2% to 2.5%.

When Tuofu Bao launched in July, it attracted strong interest from retail investors. On the first day it went live, the service attracted NT$150 million. There were close to 7,000 accounts opened, with an average investment of NT$30,000 per account by the second day of operation.

Then Taiwan's Financial Supervisory Commission (FSC) suspended Tuofu Bao over claims that the service provides a minimum rate of return. Regulators are concerned that Tuofu Bao may manipulate its algorithms in a bid to deceive investors.

"Jko apparently misleads its investors,” Tsai Li-ling, deputy director-general of the Securities and Futures Bureau, said at a press conference in July.

Meanwhile, the Securities and Futures Bureau has banned Jko Asset Management from accepting any new capital through Tuofu Bao until the issue is resolved.

In fact, Taiwanese regulators are skeptical of a "non-financial company" directly foraying into investment services. The FSC recommends that Jko first do a trial run in Taiwan's fintech regulatory sandbox. Red tape reportedly hampers the sandbox's efficacy, which may explain why it has not attracted greater interest from fintech startups.

Jkopay is one of the few Taiwanese fintech startups with big ambitions. It is difficult to build a digital banking business from the ground up in Taiwan, where local incumbents dominate the financial sector. Even Taiwan's three virtual banks are operated by consortia of large, established companies: the Japanese tech giants Line and Rakuten, telecoms juggernaut Chunghwa Telecom, and their respective local banking partners.

The problem for fintechs in Taiwan is that unlike in say, much of Southeast Asia, the government does not see them as integral to promoting financial inclusion. There are very few unbanked Taiwanese, which is not a surprise given that Taiwan is wealthy and already has too many retail banks - 37 to be exact. To be sure, some Taiwanese are underbanked, particularly SMEs, but again, the government has yet to promote fintech startups as a means of addressing that issue.

Without more flexibility from regulators, Jko will struggle to expand beyond payments, never mind building an ecosystem similar to Ant Group's. That would be a shame as Taiwan's financial sector could benefit from innovative digital-first products and services.