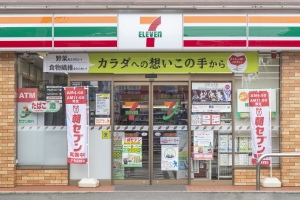 In Japan, cash is still king. Indeed, the Japanese have a fondness for physical currency that has ebbed amongst their neighbors. Cash accounts for 80% of transactions in Japan, compared to 40% in China and 10% in South Korea.

In a January 9 report, Tokyo Review explains: "The love of cash [in Japan] goes beyond simply paying for small transactions with coins instead of a smartphone...  It’s not uncommon to see someone making a big-ticket purchase in an electronics or furniture store produce a wad of ¥10,000 notes from their wallet rather than a card."

Japanese often describe themselves as unique - in Asia and the world - and in many ways they are. Alongside their affinity for cash, they also like compact discs (a music medium that some in Generation Z would struggle to identify), which still account for 72% of music sales, and newspapers: Japan has one of the world's highest newspaper subscription rates.

In a traditionalist society like Japan's, it's not easy to promote change. Since banks aren't going to take the lead on cashless payments, someone else needs to step in - like Japan's ubiquitous 24-hour convenience stores. In July, Japan's Family Mart convenience store chain will launch a proprietary app-based mobile payment system called Famipay, which will be available at the chain's 17,000 outlets throughout Japan. Customers pay by QR code: Cashiers scan the code on a user's mobile device.

In the past, Japan's leaders in cashless payments like Suica relied on contactless payment that requires expensive equipment to operate. As Nikkei Asian Review notes in a Dec. 27 report, card readers for contactless payment cards cost $500 to $1,000, a price that many store owners have balked at. QR and barcode based payment is more economical and may well find a more receptive audience among retailers.

Some analysts say that the lack of a clear cashless payment standard has slowed Japan's adoption of the technology. Besides Suica's contactless payment system, Japan has cashless payment options from Apple, Google, the Line messaging app and Yahoo, as well as its homegrown e-commerce giant Rakuten. If QR codes win the standards battle, then it stands to reason that Japanese people will gradually reduce their dependence on cash.

Yet as Tokyo Review notes, there is another, arguably more important, reason cash remains king in Japan: The Land of the Rising Sun is among the safest countries in the world. Japanese consumers are at low risk of being robbed, so they don't hesitate to carry lots of cash on their person. At the same time, interest rates are low so putting cash in the bank doesn't always have huge financial benefits. Finally, Japan doesn't have a big problem with counterfeit currency. Japanese people trust banknotes so they aren't as eager to get rid of them as people in countries where fake currency is commonplace.

With those factors in mind, the Japanese government's goal of making Japan's transactions 40% cashless by 2025 seems rather optimistic.