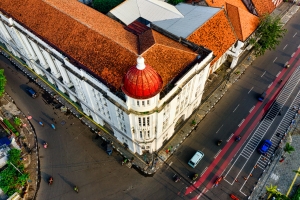 Indonesia's e-commerce market is surging amid the pandemic, giving a big boost to digital wallets. Transactions at the four largest e-commerce sites in the country will double to US$29 billion from US$14 billion in 2019, according to a study by the Bank of Indonesia published in July. Digital wallets accounted for 90% of cashless payments in the first five months of the year, while bank cards handled the rest.

SMEs are integral to Indonesia's cashless ambitions. To that end, Bank Indonesia introduced the Quick Response Indonesian Standard (QRIS) last year, a standardized QR code that works across all of Indonesia's digital payments networks and allows users to transfer funds among different e-wallets. More than 4 million merchants in Indonesia have implemented QRIS since it came into effect in January.

QR code technology is popular among Indonesia's SMEs for its ease of use and low costs, especially compared to chip cards and RFID tags. QR code deployment can cost next to nothing: Print the code and download the smartphone app. In contrast, cards and tags require buying an EDC reader machine, which cost at least Rp 450,000 (US$31.26), The Jakarta Post estimates. Many of Indonesia's SMEs cannot afford card reader machines.

Meanwhile, Indonesia's digital payments segment remains highly fragmented, with up to 37 different players, according to The Jakarta Post. There are just a handful of heavyweights among them though. They include Gojek's GoPay, which is now backed by Facebook and PayPal, Grab-backed Ovo and Ant Group-backed Dana. Ovo and Dana are reportedly considering merging to form a united front against GoPay. Neither Ovo nor Dana is likely to overtake GoPay otherwise.

Overall, since the pandemic began LinkAja says its users have doubled, while transaction volume has grown 700%. LinkAja now has 234,000 merchants using its platform.

One reason for such fast user adoption may be that LinkAja is not currently charging SMEs to join its platform.

More in this category: « Covid could fast-track cashless adoption in the Philippines South Korea goes cashless all over again »
back to top