In Asean, Vietnam No. 2 source of fintech funding this year after Singapore 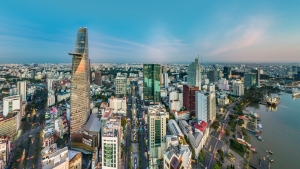 In 2019, Vietnam has become one of the hottest markets for fintech investment in Southeast Asia, second only to Singapore. Fintech funding in Vietnam surged to $410 million in the first nine months of the year, accounting for 36% of Asean's total, compared to just 0.4% during the same period a year earlier, according to a new report by PriceWaterHouseCoopers (PwC), the United Overseas Bank (UOB) and the Singapore Fintech Association (SFA).

Digital payments are the dominant fintech segment in Vietnam. "For now I think what is taking up a lot of traction in the developing economies will be very consumer-based," Wong Wanyi, FinTech Leader at PwC Singapore and co-author of the report, told Nikkei Asian Review in November.

The Vietnamese government is keen to boost digital banking as a part of a wider drive to improve its people's access to financial services and become a cashless society by 2025. Compared to its aging neighbors in Northeast Asia, Vietnam is much younger (70% of the population of 91 million is younger than 35) and less attached to cash. Vietnam also benefits from high internet and smartphone penetration rates in its largest urban regions, a growing e-commerce industry and solid annual GDP growth. Vietnam's economy grew by 7.08% in 2018, its best performance in 11 years. The government is targeting 6.8% growth this year.

Vietnam may well be Asean's most underbanked major country behind Myanmar. According to a Standard Chartered report published in May, only 31% of the Vietnamese 15 or older have a bank account, a lower percentage than in the Philippines, Indonesia and Thailand. 90% of transactions in Vietnam use cash, while only 3.5% of Vietnamese have a digital wallet, the report found.

The surge in fintech funding in Vietnam can be attributed to two large digital payments deals, which account for a whopping 98% of all fintech investment in the Southeast Asian country this year. In July, Japan's SoftBank and the Singaporean sovereign wealth fund GIC invested US$300 million in the Vietnamese digital payment company VNpay. The other big Vietnam fintech deal occurred in January, when the digital wallet MOMO Pay received $100 million in a Series C funding round led by U.S. private equity firm Warburg Pincus.

According to the Ho Chi Minh City Computer Association, Vietnam had 154 fintech firms by mid-2019, compared to 120 last year. Overall, they have raised $1.1 billion in investment capital.

Besides payments, which account for about 60% of Vietnam's fintech businesses, other key segments include crowdfunding (10.5%), crypto and blockchain (about 8%) and POS/mPOS management (about 5%), according to the State Bank of Vietnam.

More in this category: « How data personalization is driving the future of Asia's digital finance Line Pay Taiwan offers cross-border transactions through alliance with Japan, Korea and Thailand »
back to top