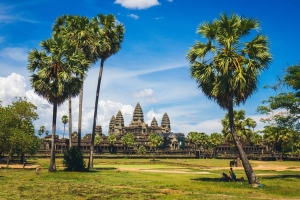 China's fintech giants are best known for dominating their home market. Outside of mainland China, they have limited market share. Merchants in countries popular with Chinese tourists increasingly accept Alipay or WeChat Pay, but the primary users are not locals but Chinese visitors who want to pay by smartphone as they do at home.

In Cambodia, however, Chinese fintechs have a chance to gain a strong foothold in the local payments market. To be sure, Cambodia's efforts to boost financial inclusion are a key reason for that. The Cambodian government sees digital banking as an efficient way to bring the kingdom's large unbanked population (estimated by the World Bank at 78% of Cambodians aged 15 and up) into the formal financial system. Further, commercial ties are burgeoning between Beijing and Phnom Penh. China is Cambodia's largest investor and source of tourists. That has opened up opportunities for Alipay and WeChat Pay to partner with local firms.

Cambodia-based mobile pay app Pi Pay, which says it has about 260,000 users and processed transactions of US$170 million, has partnered with both Alipay and WeChat Pay so that their apps can be used at Pi Pay points of sale payment systems in Cambodia. The initial market is Chinese tourists, but over time, it is feasible that the apps could be adopted by the local population. Alternatively, Alipay or WeChat Pay might take a strategic stake in a local payments app.

"These partnerships are important as we see a growing influx of Chinese tourists to Cambodia, which means the demand from visitors to safely access the apps they use daily at home is also increasing," Pi Pay CEO Tomas Pokorny told China's state-owned Xinhua News Agency in July.

A report by Visa published in June found that Cambodia is accelerating its adoption of digital payments in line with steady internet penetration. Data compiled by Cambodia's telecoms regulator show that the kingdom had 13.6 million internet users in 2017 among a population of 16 million. In 2017, digital payments in Cambodia grew 43% annually in terms of value and 58% in terms of transactions, the Visa report found.

The study found that more than half of Cambodians (54%) expect the kingdom's economy to be cashless within seven years. That would be an impressive feat.

For its part, Visa is bullish on Cambodia's cashless payments potential.

“Electronic payments are very much related to internet penetration and technology know-how. Thus, given the rate at which Cambodians are currently adopting new technologies, we expect cashless payments to boom in the country," Chum Monika, Visa's Cambodia country manager, said in the report.

More in this category: « How has Ovo become one of Indonesia's top digital wallets? Will cash be a thing of the past in Thailand's future? »
back to top