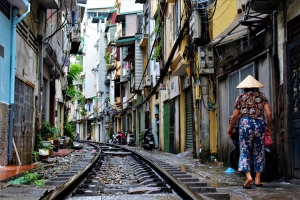 Singapore-based ride-hailing app Grab intends to become Southeast Asia's premier digital bank, with Vietnam serving as a key growth market. Flush with cash from a recent fundraising round that netted a record $4.5 billion - the most ever for a startup in the region - Grab plans to pour hundreds of billions of dollars into one of Asean's fastest growing economies.

To be sure, Vietnam and Indonesia both have large, young, tech-savvy populations, and fast rising smartphone penetration. But of the two, Vietnam is probably an easier nut for Grab to crack. Grab's archrival Go-Jek is based in Indonesia. While Grab has made considerable headway in Go-Jek's home market, the latter firm still has the home-court advantage.

Further, Vietnam is likely the most underbanked major Asean market - it has a population of 90 million - except for Myanmar. In a report published in May, Standard Chartered found that just 31% of the Vietnamese population aged 15 and up has a bank account, lower than the Philippines, Indonesia, Thailand, Malaysia and Singapore. Just 3.5% of Vietnamese have a digital wallet while 90% of transactions in Vietnam are paid with cash, the report found.

Grab is betting that Vietnamese consumers will want to do their digital banking in the same app they prefer for ride hailing. Data from research firm App Annie show that Grab was Vietnam's top ride-sharing app by downloads from January to July.

Grab's new investment in Vietnam follows its establishment of a strategic tie-up with local mobile wallet Moca a year ago. Moca is a key partner for Grab because it hold a payment services license from the State Bank of Vietnam (granted in 2016) along with a network of 11 local banks as partners.

"And we expect exponential growth of mobile payments driven by Moca and Grab across Vietnam,” Tran Thanh Nam, Co-founder and CEO of Moca, said in a press release announcing the deal.

The tie-up gave Moca's merchant customers access to Grab's large user base, including both drivers from its ride-hailing app and consumers using the app.

Grab's customers, meanwhile, were given the ability to use Moca's payment services for bill payments, airtime top-up and make payments at retail stores such as McDonald's and 7-Eleven.

While Grab's deep-pocketed investors remain optimistic about the firm, its ability to turn a profit remains questionable. Maa told Reuters that Grab is profitable in several of its ride-sharing markets but did not specify which markets.

The war has now expanded to the fintech space, but the core principle remains the same: If Grab burns through cash the way Uber did without reaching profitability as a company (not just in a few markets), its inevitable IPO will disappoint investors, and the company's business model will come under much tighter scrutiny.

More in this category: « WhatsApp eyes Indonesia payments market Why hasn't WeChat Pay caught on in Taiwan? »
back to top