Gojek steps up its fintech play amid pandemic 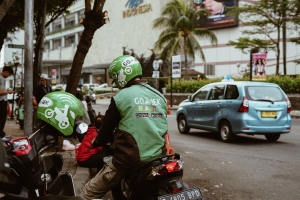 A unicorn cannot thrive on ride hailing alone. That's why Indonesia's Gojek is betting on fintech to bolster its fortunes. Its arch-rival Grab is taking a similar road. Starting with payments, the ride-hailing giants aim to transform themselves into bonafide financial services providers, monetizing customer data by using it to create different digital banking products. Despite the pandemic, Gojek managed to raise another US$1.2 billion in March to support its expansion efforts. Gojek then acquired the Indonesian payments startup Moka and established a tie-up with the fintech Pluang, which offers digital gold investments.

The Moka acquisition, reportedly worth US$130 million and not announced publicly, will support Gojek's food-delivery service GoFood. The Moka app allows merchants to accept digital wallets, debit and credit cards as well track sales and inventory. The Jakarta-based firm is present in 100 Indonesia cities and has about 35,000 merchant partners, primarily restaurants, coffee shops and retail outlets.

The addition of Moka should help Gojek shore up its position in Indonesia's burgeoning digital payments segment. There are more than 40 digital wallet operators in the country. Some analysts say that its GoPay wallet is the market leader, but the data to support that assertion are limited. Research firm Ipsos found that 55% of Indonesians prefer GoPay in a survey of 500 millennials and GenZers conducted from Dec. 2019-Jan. 2020. Grab-backed Ovo was a distant second at 29%.

That's quite a turnaround from a survey conducted about a year ago by Indonesian research firm Snapcart. That survey found that 58% of respondents preferred Ovo and just 23% GoPay.

The Indonesian market is so large that if GoPay can become dominant there, it can put international expansion on the back burner. That's a luxury that Singapore-based Grab doesn't have. Indonesia has a population of 268 million, roughly equivalent to the combined populations of the Philippines, Vietnam and Thailand.

For GoPay to retain users, it needs to convince them to use its digital wallet rather than cash. It's easy enough to attract users with subsidies, but ensuring their loyalty is another matter. Just 54% of respondents to the Ipsos survey said they would keeping using digital wallets without discounts or cashback perks.

One way to build user e-wallet user loyalty is to offer customers investment products. GoPay's rivals Ovo and LinkAja are focusing on mutual funds. GoPay, however, is literally going for the gold with its Pluang tie-up. Gold is a favorite traditional investment product of Indonesians.

The aptly named online gold investment service from GoPay and Pluang is called GoInvestasi, currently in its beta stage in Indonesia. Not only does it make investing in gold a snap, GoInvestasi also aims to "increase financial inclusion and enable growth for all levels of society," Sony Radhityo, Gojek’s head of third-party platforms told KrAsia.

Online gold investment has been steadily growing in Indonesia over the past few years. Among the platform companies offering the service are e-commerce giants Bukalapak and Tokopedia.

More in this category: « Is COVID-19 accelerating the cashless push in Malaysia? A new twist in the Grab-Gojek digital banking battle »
back to top