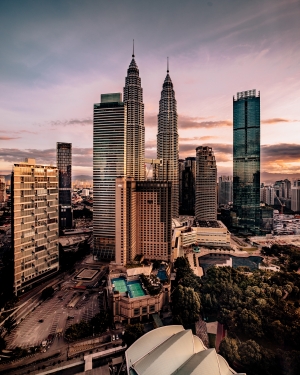 Malaysia's digital payments sector is heating up as fintechs and incumbents enter into partnerships in a bid to strengthen their positions in the fast growing market. Research by Visa shows that 70% of Malaysians prefer to shop at retail outlets where merchants accept digital payments. The Malaysian market of 32 million people has plenty of room to grow, as cash still accounts for 60% of transactions. JPMorgan Chase expects that fast adoption of e-payments by Malaysians could see digital wallets surpass cash use by 2021.

According to research by App Annie and iPrice, Malaysia's preferred digital wallets include GrabPay, Touch n' Go, Boost, and Fave. It's hard to know how competitive GrabPay is, because the researchers used data from the overall Grab app, which also includes ride hailing and food delivery services. Fave says it has about 4 million customers while Boost says it has 3.5 million users and 61,500 merchant partners.

China's UnionPay, the world's largest card issuer, recently inked partnerships with Boost and U Mobile-owned GoPayz as it looks to deepen its footprint in Southeast Asia fintech. UnionPay has been on a sustained international expansion drive as growth potential is limited back home. UnionPay dominated the first generation of cashless Chinese banking, but has fallen behind the mobile internet wave, dominated by Ant Financial and WeChat Pay.

The tie-up with Boost allows UnionPay access to that company's large Malaysian user base which it wouldn't be able to reach without a local parter. Users of the app can now make QR code based payments at Old Town White Coffee, Orange Convenience Store, Colours & Fragrances and a number of other common retail outlets. In the future, it's possible users of the digital wallet will be able to make payments to the 16 million merchants who accept UnionPay QR code globally.

UnionPay’s partnership with GoPayz allows users to make digital payments with the UnionPay Virtual Card available on the app. Further, GoPayz users can pay UnionPay merchants internationally with either a physical GoPayz UnionPay Card or by scanning a QR code.

Meanwhile, in November fintech sensation TransferWise officially launched its Malaysian operations. With an eye on further developing its local remittances business, the UK-based startup is discussing with Bank Negara Malaysia (BNM, Malaysia's central bank) possible partnerships with Malaysian e-wallets. Currently, locals using the international remittance company’s services can transfer up to RM30,000 per day, while foreign workers  have a transaction limit of RM5,000. TransferWise is also in talks with the regulator to launch a multi-currency card in Malaysia.

In a press release, TransferWise said sending money to 83 different countries with its service is up to four times less expensive for Malaysians than using banks. For example, sending RM1,000 to the UK costs RM7.20 with TransferWise compared to RM34.60 with a bank. These figures are based on the prices of five major banks on November 18, according to TransferWise.

More in this category: « Fintech in name only Taiwan expects mobile payments to hit a record NT$100 billion this year »
back to top