Despite digital, Singapore uses cash more than you think 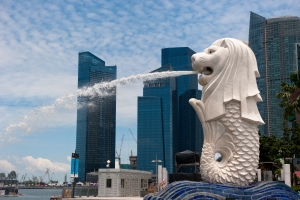 Singapore is an ascendant digital finance hub, in 2018 attracting $365 million in fintech investment. That investment was double the amount raised a year earlier. Despite its small size, the city-state is still the No. 5 fintech market in APAC by funds raised.

Fintech's rise in Singapore can be attributed largely to its regulators' support for the technology. When financial regulators lead the way, investors and incumbents are bound to follow.

It thus may come as a surprise that cash and checks still account for 40% of Singapore's payments. Analysts say that older Singaporeans, especially vendors in hawker stands and wet markets, are reluctant to accept forms of payment other than cash. In many cases, they simply aren't equipped to handle transactions any other way, and if they have an established business, may not feel any obligation to accommodate the digitally inclined.

Given Singapore's demographic situation, cash could remain popular for a long time Overall, Singapore is the second-fastest aging country after South Korea, according to data compiled by the United Nations. Singapore is on track to become a hyper-aged society by 2025, with more than 20% of the population over the age of 65.

Another obstacle to digital payment adoption could be the dizzying array of options, analysts say. Consumers and merchants may both feel overwhelmed. For instance, it is possible to use a smartphone to pay for a transaction in Singapore with NETSPay, DBS PayLah, GrabPay, AliPay, WeChat Wallet, Apple Pay or Samsung Pay. Consumers may figure it's just easier to use cash. Merchants, meanwhile, need all kinds of terminals and apps if they want to capture business from mobile wallet users.

A study by UnionPay International and Nielsen published in November 2018 found that just 42% of Singaporeans are confident that the nation will go cashless in the near future, although 3 in 5 of them would like to see it happen. The study found that Singaporeans expect that the country won't be cashless until roughly 2030.

Respondents estimated that it would take Singapore around 12 years on average to go completely cashless.

More in this category: « Are Chinese tourists speeding Japan's adoption of cashless payments? WeChat sees Malaysia as its gateway to Southeast Asia »
back to top