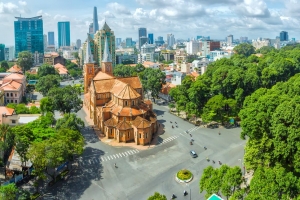 By now it's a familiar story: COVID-19 is driving cashless payments adoption in Southeast Asia. As one of the region's key economies and recipients of fintech investment, Vietnam is a market to watch. What's notable about Vietnam is that it's better poised for an economic recovery than almost any other country because of how well it has controlled the coronavirus pandemic. While the rest of the world was in recession, Vietnam's economy grew 0.36% in the second quarter, beating a 0.9% contraction forecast by economists surveyed by Bloomberg.

Faster fintech adoption can help add momentum to Vietnam's economic recovery. According to the State Bank of Vietnam (SBV), Vietnam's domestic banking transactions grew 26.2% from January-April, up 15.7% over the same period a year earlier. Mobile payments, meanwhile, surged 189% in number and 166% in value.

That mobile payment growth was largely organic, driven by hygiene concerns amid the pandemic. Fewer face-to-face transactions necessitates going cashless more often. The Vietnamese government intends to capitalize on the trend. In March, Prime Minister Nguyen Xuan Phuc told the SBV to submit a mobile money pilot plan. In April, he asked the Ministry of Information to cooperate with SBV on the initiative.

Another reasons mobile payments are growing so fast in Vietnam is that fintechs and banks are discovering that it sometimes makes more sense to cooperate than compete. Fintechs can help Vietnamese banks improve their digital services much faster than the banks can on their own. For instance, VietCapitalBank cooperates with e-wallets such as ZaloPay and AirPay, allowing the bank's card holders to to make cashless payments at convenience stores.

Among major Vietnamese banks that have rolled out contactless smart cards are Techcombank, BIDV, Vietcombank, Kienlongbank and TPBank. TPBank, Vietinbank, and Sacombank customers can withdraw cash from the banks' ATMs with a QR code. Eximbank and VietBank customers can scan their fingerprints to receive cash at the banks' ATMs or transaction offices without a debit card, ID card, or passport.

Looking ahead, banks in Vietnam will accelerate digitization. Eight of the country's biggest banks have named digitization as one of their top priorities, according to a May report by IDC and Backbase. Those banks forecast that intelligent automation will help them grow new accounts by 50%.

More in this category: « A new twist in the Grab-Gojek digital banking battle AMTD will take controlling stake in FOMO Pay »
back to top