Can AirAsia build a super app? 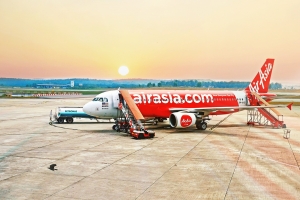 If ride-hailing companies can aspire to be digital banks and super apps, then perhaps airlines can too. In fact, consumers probably trust airlines with their data more than they do Grab and Gojek. For Malaysia's AirAsia, which lost a record US$238 million in the second quarter, developing new revenue drivers is a necessity as the pandemic keeps international air travel grounded. That's why the company is expanding its fintech services - including possibly applying for a Malaysia digital bank license - and launching an Asean focused super app that covers entertainment, shopping and travel.

AirAsia first ventured into fintech in 2018 with its BigPay mobile money app, which has since accrued about 1 million users in Malaysia and is reportedly now one of the country's largest e-wallets by gross transaction value. While AirAsia's core airline business has cratered during the pandemic, BigPay has benefited from the cashless payments boom. The e-wallet is "showing strong growth in international money transfers and online spending thanks to the worldwide acceptance of its card," AirAsia said in a statement cited by The Business Times.

BigPay is striking while the iron is hot as it expands to neighboring Singapore. According to AirAsia, the app and its pre-paid Visa card will be launched in the city-state this month. Singapore is not exactly short on e-wallet choices, but interest seems strong. The early-access waiting list for BigPay is at 20,000 strong, BigPay said in a statement.

Remittances will be key business for BigPay in Singapore. The Malaysian firm says that users will be able to remit money "quickly and at a competitive rate" to the major Asean economies of Indonesia, the Philippines, Thailand, Vietnam and Malaysia as well as China, India, Bangladesh, Nepal and Australia.

AirAsia did not apply for a Singapore digital bank license, but it is considering applying for one in its home market. That move would be prudent. Digital financial services will be at the crux of AirAsia's bid to diversify from airline into airline + digital services provider. The company checks key regulatory boxes too: It is Malaysia based and has adequate cash to meet Bank Negara's capitalization requirements. Having a successful digital payments business can't hurt its prospects either.

As for the broader super app push, barring a tie-up with a major platform company, it will likely progress slowly for as long as international air travel is grounded in Southeast Asia. AirAsia needs to give the 60 million users of its mobile app a good reason to spend time in the app. If they cannot book air tickets, accommodation or travel activities, that will be a challenge.

With that in mind, AirAsia is playing the long game. The airline recently announced a partnership with Agoda, which allows users of its SNAP flight and hotel combo platform to book 600,000 Agoda accommodation choices. The Agoda partnership is "part of our group-wide strategy to revitalise travel as we anticipate the reopening of borders in Southeast Asia in the near future," AirAsia CEO Tony Fernandes said in a statement.