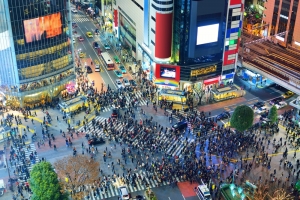 Japan is the world's No. 3 economy and known for its tech prowess, yet the Japanese people prefer cash over other forms of payment. Just one in five transactions in Japan are cashless. Some analysts say that Japan can learn from its giant neighbor China when it comes to cashless payments. In less than a decade, China has gone from cash reliant to nearly cash free. In 2017, nearly half of the world's digital payments were made in China.

To be sure, many Japanese businesses welcome Chinese tourists. If adopting cashless payments will bring in more business, they may well accept WeChat Wallet and Alipay. But it's a stretch to see Chinese tourists as driving a transformation in Japan's payments culture. Indeed, Japanese consumers are cool on Chinese brands. They aren't likely to install Alipay or WeChat Wallet on their smartphones.

As The Journal article points out, the Japanese worry about data privacy, especially with regards to Chinese internet platforms. Mizuho Financial Group is trying to persuade its customers that their data will be safe - not shipped off to China - as it rolls out a payment app tie-up with Alipay and UnionPay.

At the same time, the Chinese tourist market is volatile. Since 2005, Beijing and Tokyo have experienced three crises in their relationship, all which hurt bilateral trade and investment. After the 2012 crisis, the fall-off in Chinese tourist arrivals to Japan was pronounced. Meanwhile, China and Japan have resolved none of the outstanding disputes, whether regarding Japan's wartime record in China or the islands that both countries claim. A future crisis cannot be ruled out.

The crises in bilateral relations have had a lasting affect on Japanese people's impression of China. While about a 1/3 of Japanese had a positive impression of China in 2007, that figure steadily fell over the next decade. In 2018, just 13% of Japanese viewed China favorably, according to the Japan-China Public Opinion Survey.

With that in mind, the key impetus for Japan's cashless revolution is not business from China but the 2020 Tokyo Olympics. The whole world will descend on Tokyo for the Games. Many of the visitors will want to pay with their credit cards or mobile wallets. Japanese financial giant Mitsubishi UFJ Financial Group (MUFG) has teamed up with the U.S. internet firm Akamai to develop a consumer payment network on the blockchain in time for the Olympics. If the network is successfully implemented, it could be the most advanced of its kind globally.

More in this category: « Can Japan's Line make fintech pay like WeChat has? Despite digital, Singapore uses cash more than you think »
back to top