Airwallex reaches for the stars 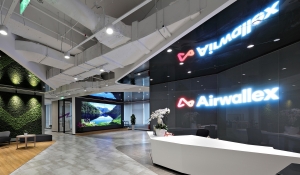 Nobody can accuse Airwallex of having modest ambitions. The Australia-founded and Hong Kong-based unicorn just raised another US$100 million in an extended Series D round at a valuation of US$2.6 billion. The U.S.'s Greenoaks was the lead investor. The cross-border payments upstart plans to use the capital injection to expand across four continents - Australia, North America, Europe and Asia.

Airwallex and its backers believe the company has found a niche providing online cross-border payments services to SMEs and some large internet companies, most of which are in China. Airwallex's big Chinese customers include Tencent, JD.com, Ctrip.com and Trip.com. Co-founder Lucy Liu told Nikkei Asia in 2019: "Our vision is to become the fundamental infrastructure for online businesses and SMEs to scale." The following year, co-founder Jack Zhang told FT that Airwallex is building digital payments infrastructure to help SMEs operate globally.

At the moment, the primary value Airwallex provides is making cross-border transactions cheaper and speedier. For Australian SMEs, the company's services are appealing because Australian banks are notorious for high forex fees. The World Bank estimates that sending money overseas from Australia is roughly 11% costlier than the G20 average, 13% more than the UK and nearly 40% higher than the US. Australian financial regulators have pressured the country's big banks to lower their forex fees, without much success. Perhaps competition from Airwallex and others will do the trick.

In an interview with Australian Financial Review, Jack Zhang said that the company's revenue in Australia during the first quarter already exceeded the total it generated there in 2020. “We achieved the highest growth rate in Australia of all the markets we’re going into,” he said.

Impressive, but what about other markets where bank forex fees are not so high? Will Airwallex be equally appealing? Airwallex is not just ramping up its Australia business: It is also expanding in the UK, continental Europe, the U.S. and Greater China. And that is just for now. Later this year, Airwallex plans to launch in Singapore, Malaysia and Japan.

The idea is to build a huge global payments network that can rival SWIFT's. It is a good story to sell investors, but it is hard to imagine either SWIFT or major banks sitting on the sidelines while Airwallex eats their lunch. In fact, SWIFT unveiled a plan in September 2020 to transition from financial messaging into transaction management services. It aims to provide 4 billion accounts with instant and frictionless transactions.

At the same time, Airwallex is burning cash faster much faster than it is earning revenue. Its goal is to reach US$100 million in revenue this year, and according to Zhang, US$1 billion by perhaps 2025.

Thus far, Airwallex has relied on taking an undisclosed cut of each client transaction to make money. It has worked well to attract customers, but Airwallex is unlikely to become a profitable company if it cannot find other revenue drivers. It does not yet have a banking license in any of its markets. The company moved its headquarters to Hong Kong in 2019 in a bid to win a virtual banking license, but came up short.

More in this category: « Commonwealth Bank throws its hat in Australia's BNPL ring BNPL competition in Southeast Asia heats up »
back to top