Afterpay is on a hot streak 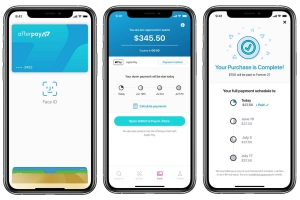 Australia's Afterpay is riding high on the BNPL boom sweeping its home market, the United Kingdom and United States. Afterpay is valued at US$23 billion, while its share price has risen about 960% since the ASX bottomed out in March. Both the UK and U.S. are key growth drivers for Afterpay, accounting for 41% of its revenue in FY 2020. Services like Afterpay's are gaining in popularity not only because people are shopping online more often, but also because credit is harder to come by during the pandemic-induced downturn. Some lenders are concerned about the ability of consumers to reliably make payments. As a result, consumers are more apt to be interested in installment payments.

In the U.S., Afterpay is growing especially fast. Its active U.S. customers more than tripled over the past fiscal year, while revenue in the country surged to A$4 billion from A$900 million a year earlier.

In May, Tencent paid US$300 million for a 5% stake in Afterpay in a bid to develop a larger global fintech footprint. In a statement, the Chinese firm said that Afterpay's service aligns well with consumer trends developing globally. Afterpay could partner with Tencent if the Australian firm sought to enter Hong Kong, mainland China or both markets.

However, Afterpay could face headwinds in the years ahead. The most obvious would be increased competition. In the U.S., on which Afterpay is betting big, the Australian firm will face off against Sweden's Klarna, PayPal, Shopify and others. Amazon, which has a 50% share of the U.S.'s huge e-commerce market, may decide to create a BNPL solution of its own rather than adopting Afterpay.

Like so many fintech unicorns, Afterpay is also continuing to spend heavily on international expansion irrespective of the effects on its balance sheet, wagering that fast customer acquisition will win the day.

"In many ways, current [share]prices have presumed success embedded in the price," Medallion Financial managing director Michael Wayne told Australia's Finder. "Only time will tell whether or not these businesses can avoid customer attrition and bad debts, and achieve enough scale to justify these valuations."

More in this category: « Is Airwallex defying gravity? TransferWise begins to carve out a niche in Asia »
back to top
© 2007 - 2021 Kapronasia