A new twist in the Grab-Gojek digital banking battle 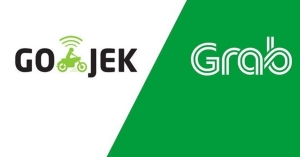 Southeast Asia's two most valuable tech startups are determined to reinvent themselves, transforming from ride-hailing giants into digital banks. Singapore's Grab is leading in every Southeast Asian market but one: Indonesia, which happens to be where its arch-rival Gojek is based. Having recently received investments from Facebook and PayPal, Gojek looks to have the edge in the region's largest economy. But Grab is determined to prevail there. That's why the Grab-backed digital wallet Ovo is reportedly planning to merge with Dana, which is backed by Chinese fintech giant Ant Financial. Together, Ovo and Dana might be able to give Gojek's fintech arm GoPay a run for its money.

In 2019, GoPay was Indonesia's top e-wallet by transaction value, accounting for 61% of all digital wallet transactions, according to m2 insights. IDN Financials estimates that GoPay processed a total of US$6.3 billion last year.

A recent survey of 500 Indonesian respondents by research firm Ipsos also shows GoPay ahead of Ovo and Dana. 58% of the survey's respondents named GoPay as their top digital wallet. Ovo was second at 29%, while Dana was a distant third at 9%.

For Ant Financial, the Ovo-Dana merger would boost the Chinese firm's push into Southeast Asia. Ant is building up a presence in the region through strategic stakes in local rising stars rather than direct expansion. In May, Ant took a US$73.5 million stake in Wave Money, one of Myanmar's top fintech firms. Under the proposed structure of the Ovo-Dana merger, Ant would remain a shareholder in the merged entity, while the stakes of other shareholders would be pared down, according to Bloomberg.

An Ovo-Dana tie-up makes sense because neither of the two firms can likely independently overtake GoPay on its home turf. Besides, user acquisition is expensive in digital banking, often coming down to who offers the biggest cashback promotions and other perks. Ovo and Dana may as well pool their resources and burn cash together in a united front against GoPay.

Gojek's alliance with Facebook and PayPal will be a major asset going forward, regardless if the Ovo-Dana deal goes through. Facebook brings messaging and social network capabilities to Indonesia's most downloaded app, while Paypal offers a global payments network.

Meanwhile, sources cited by Bloomberg say that the coronavirus pandemic delayed the signing of the Ovo-Dana deal. While the pandemic is far from over, the companies appear to be closing in on a final agreement. However, the deal is still subject to change and may not go through, the sources said.

More in this category: « Gojek steps up its fintech play amid pandemic Cashless payments steadily gain momentum in Vietnam »
back to top