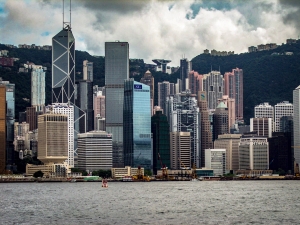 The Alibaba listing came at an opportune time for Hong Kong. Political instability has become a part of daily life in the former British colony over the past seven months. At times, the protests have turned violent. The Hong Kong economy has slid into recession. The city's ability to preserve its role as China's global financial center is in question. Alibaba's secondary listing is a much needed shot in the arm for Hong Kong, rejuvenating its fundraising credentials.

Per the Hong Kong Stock Exchange's rules, firms who have been listed for at least two years on the New York Stock Exchange, Nasdaq or on the London Stock Exchange as a premium listing qualify for a secondary listing in Hong Kong.

Other Chinese tech firms may soon follow Alibaba's lead. Tighter scrutiny of Chinese listings on U.S. exchanges has already caused some Chinese firms to mull a secondary listing in Hong Kong. Others which have yet to go public are reconsidering plans to list on the New York Stock Exchange or Nasdaq. Congress has drafted legislation that would require Chinese companies listed on U.S. exchanges to accept more comprehensive audits or be forced to delist.

“More US-listed Chinese concept stocks will come back to Hong Kong in 2020,” Benson Wong, a partner at PwC, was quoted as saying by Bloomberg in January.

Goldman Sachs reckons more than 20 big Chinese tech firms with U.S. depositary receipts could qualify for secondary listings on the Hong Kong Stock Exchange, among them Baidu, JD.com and NetEase. According to recent Chinese media reports, Baidu has finished an internal assessment for a secondary listing in Hong Kong. Bloomberg recently reported that NetEase and Ctrip.com have discussed a secondary share listing in Hong Kong with HKEX officials.

With all the focus on secondary listings, primary listings should not be overlooked. As The Wall Street Journal recently noted, it would behoove Hong Kong to attract unlisted ascendant Chinese tech firms to make their market debut in the city. Among those companies, Bytedance would be an especially big win for Hong Kong. The company owns the wildly popular video-sharing app TikTok and is valued at US$78 billion.