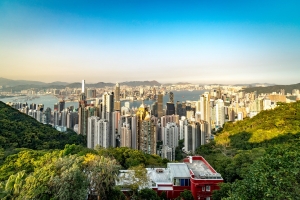 Perhaps there was nowhere for Hong Kong’s IPO market to go but down. From January-March, fundraising hit an all-time high of US$13.9 billion while Hong Kong Exchanges and Clearing (HKEX) posted a record profit of HK$3.8 billion (US$490 million), up 70% year-on-year. At that point, China’s fintech crackdown, which has widened to target tech giants in general, had yet to impact market sentiment.

By the second quarter, it was a different story. In April, China fined Alibaba a record US$2.8 billion. Meituan got off lightly in comparison with an estimated US$709 million fine. Tencent, meanwhile, was ordered in June to restructure its financial units. It is unsurprising that investors are getting cold feet about paying sky-high valuations for Chinese tech companies under these circumstances.

Unlike the Nasdaq and NYSE, which attract firms from all over the world, the Hong Kong Stock Exchange relies almost entirely on IPOs (or secondary listings) by mainland Chinese companies. When the mainland economy booms, so do Hong Kong’s capital markets. Yet, with all of its eggs in one basket, Hong Kong is vulnerable to regulatory headwinds on the mainland. The crackdown on tech companies just happens to target the types of firms that helped drive a long IPO boom in the former British colony.

According to Bloomberg, capital raised on the Hong Kong Stock Exchange this year is just half of last year’s levels, which is affecting the city’s position as a top fundraising hub. Just seven firms have gone public in the second quarter thus far, the fewest since 2009. In contrast, the Nasdaq is having a banner year. Capital raised has already exceeded the total during the same period in 2020, driven by the flurry of SPAC listings earlier in the year. Among them was the largest SPAC ever in which Singapore-based ride-hailing giant Grab was valued at US$40 billion and raised about US$4 billion. Grab’s competitor GoTo, created by the merger of Indonesia’s two largest tech companies, will likely list on the Nasdaq or NYSE later this year.

To be sure, Hong Kong’s IPO market will eventually recover, but without the momentum that tech listings provide, will struggle to reach the same heights as earlier this year or 2020. There are some positive signs though. Angelalign Technology Inc., China’s top invisible orthodontic producer, launched an IPO of as much as $375 million earlier in June. The deal pipeline includes China Youran Dairy Group (which could raise up to US$799 million) and CARsgen Therapeutics Holding, which aims to raise up to US$401 million.

More in this category: « Why is HKEX riding high? GoTo's strong IPO defies the odds »
back to top