Decline in HK RMB deposits a sign of things to come? 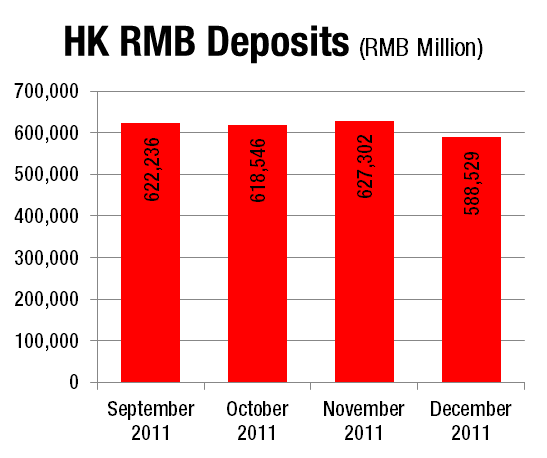 Earlier this week the Hong Kong Monetary Authority published the December 2011 monetary statistics. Among all of the data, one interesting statistic stood out which was the decline in RMB deposits held in HK also called CNH.

We have talked about this trend in previous commentaries, but the relatively sharp decline could be an indicator of what is to come. One of the key reasons for the decline is no doubt the clarification by the Chinese government on the official procedures for bringing offshore RMB back onshore to be used in the onshore RMB or CNY market.

The main official channel, which is just getting off the ground is the reverse QFII program or rQFII, but since the market was setup, there have been certain exceptions that have allowed offshore companies to bring money back onshore especially if the offshore company is a subsidiary of an onshore entity. Bank of China is one of the companies who was able to take advantage of this.

The offshore market still holds some appeal for Chinese corporates who are looking for loans or to raise money, but struggle to do so in the onshore market due to tighter credit conditions. The clearer rules about bringing CNH back onshore however make raising RMB in HK even more attractive.

Yet, we expect that offshore RMB deposits will continue to slow or decline as more companies take advantage of the expanding channels to bring money back onshore and the RMB as a whole becomes less attractive due to the expected slower future appreciation of the currency.

More in this category: « Decrease in China Hong Kong Trade and Investment Numbers Dimsum bonds no longer appetizing »
back to top