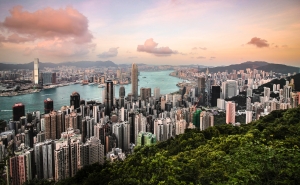 Alibaba was almost certainly waiting for a signal from Beijing before going ahead with its Hong Kong IPO plans. China concluded its fourth plenary meeting (fourth plenum) on October 31 in Beijing. China's top leaders meet at least once annually for plenary sessions. Documents from the plenum emphasize upholding national security and legal enforcement in Hong Kong, more so than in years past. That's not surprising given the degree to which this year's protests have disrupted Hong Kong society. There is no mention of any change to Hong Kong's status - only a doubling down on "one country, two systems," the model by which Hong Kong retains an economic, legal and political system different from the mainland's.

For the time being, Hong Kong will remain China's only international financial center out of necessity. No city on the mainland, nor Macau for that matter, can compete with Hong Kong's deeply liquid capital markets and links to the global financial system. That's why Alibaba isn't listing in Shanghai or Shenzhen.

Some analysts say that Alibaba is moving to list now in anticipation of an imminent U.S.-China trade deal before year-end that would boost market sentiments. That would not be a wise bet. Both Washington and Beijing believe they have the upper hand and are hesitant to concede too much to the other side. Continued stalemate could be the result.

However, Alibaba's fiscal fundamentals are strong. That should be enough to whet investor appetite for its shares. Despite China's economic slowdown, Alibaba performed well in the quarter ended September 2019, as revenue climbed 40% compared to a year earlier and net profit trebled to RMB 72.5 billion (US$10.4 billion).

Dealogic reckons that Alibaba's Hong Kong IPO will be the world’s biggest-ever cross-border secondary listing. The Chinese e-commerce giant already holds the record for the largest initial public offering of all time, its $25 billion listing in 2014 on the New York Stock Exchange.

Leading the Hong Kong deal are China International Capital Corp. (CICC) and Credit Suisse. Morgan Stanley and Goldman Sachs are among the other investment banks vying for the top positions in the listing behind those two firms.

More in this category: « How resilient is the Hong Kong IPO market? Why is Hong Kong expected to remain a global top 3 IPO market in 2020? »
back to top