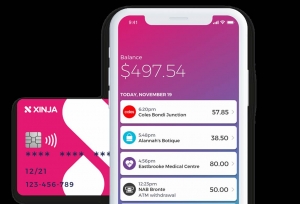 For digital banks, the pandemic is a double-edged sword. It is increasing demand for digital banking but revealing the fragility of the typical neobank business model. Many of the neobanks that couldn't make money in better times are now in varying degrees of financial trouble. Australia's Xinja finds itself in such a predicament. It needs to borrow a page out of the book of Revolut or N26 and secure another massive capital injection. That is proving to be easier said than done though. An investment of A$433 million led by Dubai-based World Investments Group (WIG) announced in March has yet to be confirmed.

That A$433 million can't come soon enough for Xinja. A recent audit by PwC showed that the Sydney-based neobank lost A$36 million in the fiscal year ended June 2020 despite raising A$55 million during the same period. The loss-making neobank has just A$25 million in assets. No wonder why PwC said in the audit that Xinja "is highly dependent on raising additional capital" to ensure that its capital base stays above prudential requirements.

Unsurprisingly, Xinja's leadership is projecting confidence that funding travails will be sorted out soon enough. Eric Wilson, Xinja founder and chief executive officer, said in a statement that Xinja raised A$10 million from investors in September (it's going to need a lot more than that) and expects that the WIG money will come through soon.

Wilson attributed the long delay to covid, which has affected WIG as an organization" as well as its ability to carry out due diligence for the investment.

Xinja has about A$500 million in deposits on which it is paying interest, but cannot put them to good use as long as it faces a funding shortfall. The company is reportedly in the midst of launching a pilot lending service now for staff, friends and family. If and when the WIG investment is confirmed, Xinja would be poised to roll out lending services to the general public.

Like most of the neobanks swinging for the fences, Xinja is betting on retail banking. It is a potentially lucrative business, but one that Australia's Big Four have long dominated. Xinja attracted deposits rapidly early in the year thanks in part to high interest rates - much higher than what the incumbents typically offer - but has had to slash rates from 2.25% to 1.8%, then 1.65%, and finally 1.5% as the pandemic weighs on its bottom line.

More in this category: « Singapore's SMEs may prove receptive to digital banks Singapore steps up fight against financial crime »
back to top