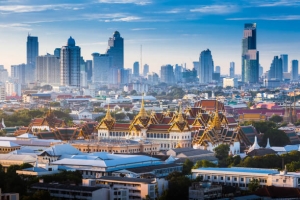 Thailand is one of the few major Southeast Asian economies that has not unveiled a digital banking roadmap. Singapore's digital banks will go live in 2022. Malaysia will accept applications for licenses this year and issue them by early next year. The Philippines recently announced it would issue digital bank licenses. Indonesia plans to clarify digital bank regulations by mid-2021. In contrast, Thailand's central bank has been quiet about the possibility of digital banks for more than a year.

In early 2020, the Bank of Thailand (BoT) said that it was exploring the possibility of issuing digital bank licenses. "In the digital era, the central bank needs to consider the overall banking landscape in the long term, and digital banks are an option. Whether digital bank licenses will be issued requires a more comprehensive study of all dimensions," the BoT’s Deputy Governor Ronadol Numnonda said in a statement.

Thailand also has a much better banked population than the Philippines or Indonesia. About 80% of Thai adults have an account at a formal financial institution, according to the World Bank, the highest rate in the region after Singapore and Malaysia.

For the remaining 20% of Thai adults, digital banks could potentially improve their access to the formal financial system. Digital lenders could improve the ability of SMEs to access credit.

Perhaps the most compelling argument for greenlighting digital banks in Thailand is that they would boost competition in the banking sector, putting some pressure on incumbent lenders to improve their service quality. That line of thinking undergirded the decision of both Singapore and Hong Kong - well banked as they are - to issue digital bank licenses.

In the meantime, some tech firms and incumbent banks in Thailand are teaming up to offer digital banking services. Line BK, the "social banking" arm of the Line app in Thailand, accrued 2 million users in the country following its October 2020 launch. Line BK is a joint venture between Line Financial Asia and Kasikorn Vision, a subsidiary of the Thai banking giant Kasikornbank. Line and Kasikorn Bank's JV offers debit cards, lending services to retail users and deposit accounts offering interest rates of up to 1.5% annually.

More in this category: « Will Australia's neobanks endure? Can Razer still become a digital bank? »
back to top