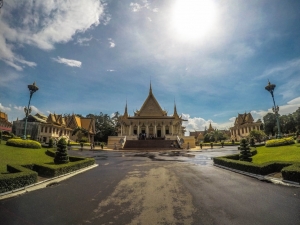 Cambodia is struggling to contain a mounting money laundering problem. In July, authorities seized $7.4 million in cash and detained nine people at Phnom Penh and Siem Reap airports as part of anti-money laundering (AML) efforts. Cambodian authorities have stepped up AML activity since February when the Financial Action Task Force (FATF), an international money-laundering watchdog, placed Cambodia on its gray list after it found "significant deficiencies" in the kingdom's AML ability.

Cambodia had previously been on FATF's gray list but was removed in 2015 after making some improvements to its AML policies. FATF put Cambodia on the gray list once again in February after the organization concluded the kingdom had never prosecuted a money-laundering case. FATF also found that Cambodia had done little to investigate cases of money laundering and terrorist financing, while the watchdog described the Cambodian judicial system as having "high levels of corruption."

In recent weeks, the Cambodian government has expressed resolve to tackle its money-laundering problem. "Our country’s reputation is at stake...if they [FATF] consider Cambodia a money-laundering destination, it will badly impact our banking system, including the national bank and private banks," Sar Kheng, Minister of the Interior, said in July.

One source told The Phnom Penh Post in February that the Cambodian government is mulling various action plans to address FATF's concerns. The initiatives include increased investigation and prosecution of money-laundering crime as well as freezing and confiscating proceeds of crime. The government also plans to implement more effective risk managment of the real estate, banking and gaming industries, the source said.

To prevent money landering, Cambodia "should work with countries which it shares borders with, and beef up border checks,” Preap Kol, Transparency International Cambodia executive director, told Capital Cambodia in May.

If Cambodia expects to be removed from FATF's gray list, it must clamp down on illicit activity in its booming casino business, which, if Macau's experience is representative, may be challenging. Macau is considered more developed and politically stable than Cambodia, yet remains dogged by money-laundering travails because of its massive gambling industry.

Cambodia has drafted the “Law of the Management of Integrated Resorts and Commercial Gaming” (LMGT) to regulate casinos, which is expected to be passed this year. The law will create the Integrated Resorts Management and Commercial Gaming Committee, a new - and hopefully authoritative - regulatory body. While the law is a good first step, enforcement remains a big question mark given Cambodia's struggles with official corruption.

The Cambodian government has been developing its gaming industry as an alternative economic driver to the traditional agricultural and textile sectors. In 2018, it granted 52 licenses to new casinos. There are now about 150 licensed casinos in Cambodia and an unknown number of unlicensed ones, Asia Times noted in a February report. The casinos, which are not open to Cambodians, target Asian tourists, particularly from China. Some analysts say that the Chinese are involved in much of the alleged money laundering activity in the casinos.

In 2018, more than two million Chinese tourists visited Cambodia, a 70% annual increase. The Cambodian government expects 3 million to visit by 2020. Cambodia's $3.6 billion tourism revenue in 2017 accounted for 13% of its GDP, Asia Times notes.

More in this category: « Australian challenger banks aim to shake up status quo How did Kakao become Korea's first profitable virtual bank? »
back to top
© 2007 - 2021 Kapronasia