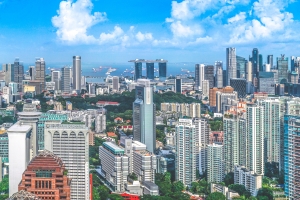 And while Singapore is a rich country, the gap between rich and poor is not growing. The Gini coefficient dropped to 0.452 last year (0 indicating the lowest level of inequality and 1 the highest), below 0.458 in 2018 and the lowest since 2001, according to government data released in late February.

With that in mind, it would be wiser to focus on the benefits digital banks could bring to the competitive landscape in Singapore rather than lumping the city-state together with its less developed neighbors as a hotspot for fintech led financial inclusion. Digital banks in Singapore aren't going to be focusing on people who have never held a bank account, but rather those who are interested in improving on what they already have.

Almost none of the survey's respondents plan to replace their existing banking account with a digital one though. 99% of customers will will retain their present account and 67% will keep using it as their primary account, the survey found.

"Therefore digital banks should initially look to displace secondary accounts rather than to become a customer's choice of a primary bank," PwC said in the report.

The report found that a major challenge for digital banks in Singapore will be winning customers' trust - an area where traditional banks are strong by default in most cases. After all, we already trust with them with our money, and we have for a long time.

Roughly 40% of respondents to the survey in Singapore said that they would only consider opening an account with a digital bank after the bank was well established. At the same time, about 1/3 of respondents said they did not trust digital banks with their personal information.

More in this category: « Revolut, Transferwise, and the Singapore Payment Services Act Who is leading Singapore's digital banking race? »
back to top